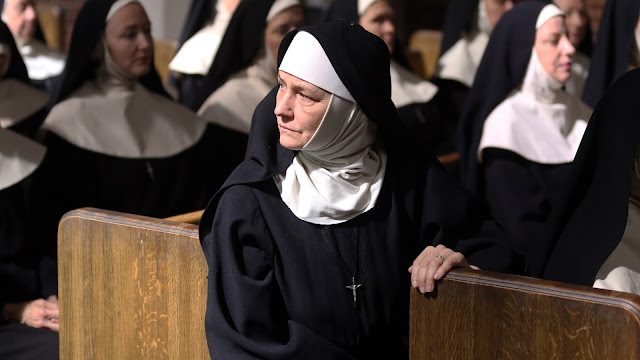 The reforms of Vatican II provide the backdrop for Margaret Betts' Novitiate, the story of a young woman who dreams of one day becoming a nun. Raised in a non-religious home, Cathleen Harris (Margaret Qualley) is sent to a Catholic school after being offered a full scholarship. Having seen little love at home from her constantly fighting parents, Cathleen finds herself drawn to the idea of being a bride of Christ, living a life fully devoted to love. She decides to take the vows, and enters a convent run by an iron-fisted Reverend Mother (Melissa Leo), who wants nothing to do with the reforms of Vatican II. Refusing to implement the reforms, the Reverend Mother keeps things in the convent as they have been for hundreds of years, utilizing strict discipline and draconian techniques of punishment and shame. Along the way, Cathleen must decide if her life devoted to God is worth the pain and sacrifice, or if she is headed down the wrong path. 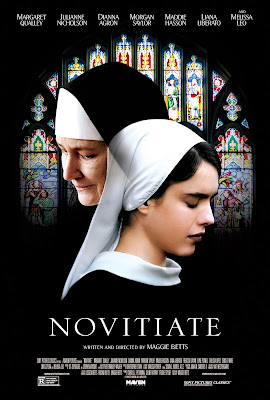 Novitiate takes a surprisingly complex look at the life of a nun, exploring ideas of faith, doubt, and love with a deep sense of respect for its subject. As the nuns question their devotion to their beliefs (and sometimes question their beliefs themselves), some begin to deal with attraction for one another in spite of their strict vows of chastity. Betts navigates these tricky waters with great sensitivity, never exploiting it for cheap eroticism. Some of the nuns have such deep fervor for their faith that it borders on mania, but what I found so impressive about the film is how it never judges its characters. Whether they have found a beautiful connection to God, or a self-defeating adherence to an outdated moral code, is left up to the audience. Yet one can't help but find a kind of beauty in the purity of heart and purpose that Sister Cathleen seeks. Novitiate understands that these are not perfect people, but finds a kind of peace in that pursuit of godliness, even as it explores the sometimes darker consequences of religious guilt and shame.

The film falters, however, in its characters' motivations. Cathleen's journey from her non-religious family to devout Catholic is glossed over without ever really connecting the dots. This tendency to take shortcuts in character development continues to be a problem throughout the film, so that actions taken by certain characters often don't quite make sense in context. There are so many fascinating ideas percolating beneath the surface of the film that it's a shame it continually undercuts its power by shortchanging the characters, who are often more like archetypes that actual people. Melissa Leo's Reverend Mother is a mostly stereotypical creation, an over-the-top caricature of a strict, tradition-bound nun.  Leo, for her part, tears into the role with great relish, but it's an underwritten part with a disappointing character arc, once again lacking real depth in her evolution. She's fun to watch, but the character is pure cliché.

While Vatican II is mentioned often, Novitiate spends little time examining the real effects of the reforms, mostly relegating them to a postscript at the end of the film. It soars when its focusing directly on the young women and their personal struggles with feelings of inadequacy in the face of an unyielding concept of perfection that is impossible to maintain. When people are constantly told they are in a natural state of sin, and can never live up to the expectations of the almighty, it can put an ungodly amount of pressure, especially for those who seek to be His earthly emissaries.

That idea of unrelenting guilt and self-loathing is easily Novitiate's strongest aspect, along with Sister Cathleen's singleminded quest to fully devote herself to the idea of pure love. Unfortunately, the film often takes too many narrative shortcuts, leaving thematic avenues unexplored with weak character development. There's something undeniably haunting about Sister Cathleen's desire for "something more," but without a satisfying character arc, the audience is left in a similar position, with little "divine guidance" from the filmmaker to satiate us.