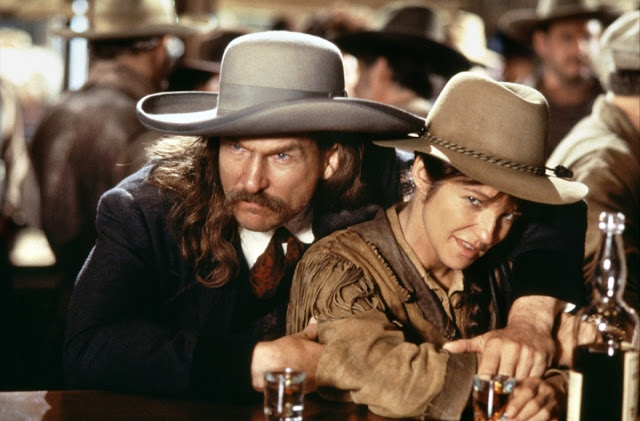 Few filmmakers are as skilled at genre revisionism as Walter Hill. His 1995 western, Wild Bill, didn't receive much attention upon its release, grossing a mere $2 million and never cracking the top ten at the box office (it also had the misfortune of opening against Toy Story). Even after the success of Clint Eastwood's Unforgiven just three years before, westerns still weren't a hot commodity, even with stars like Jeff Bridges in the lead.

Wild Bill is also not your typical western. It's a biopic of the infamous Wild Bill Hickok (Bridges), based on the novel, "Deadwood," by Peter Dexter, and the play "Fathers and Sons" by Thomas Babe, that peels back the layers of legend that have built up around him in an attempt to
discover the man beneath. It is that very legend that torments Wild Bill in Hill's film, providing an adversary far more potent than any flesh and blood gunslinger. Like all legends, there is some basis in truth to Bill's exploits, but after a while they took on a life of their own. Hill's vision of Bill is a man running from his own persona, yet never quite able to escape. He goes from town to town, yet the myth always precedes him. 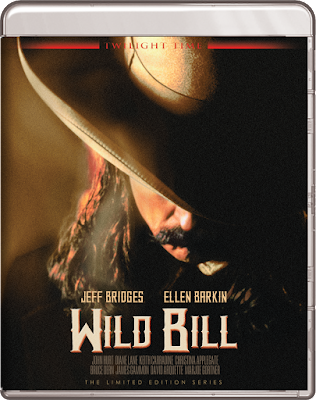 Hill presents Bill's story as a kind of kaleidoscope, told through flashbacks and memories that sometimes interject themselves as harsh, black and white VHS hallucinations brought on by Bill's addiction to opium. It's often disorienting, but what makes it so potent is how we're never quite sure if what we're watching is the true story, or another tall tale. In fact, we're also never quite sure if Bill knows the difference anymore either.

Bridges plays him as a brash, temperamental old gunslinger haunted by his past, struggling to carve a life out of a caricature partially of his own design. His relationship with Calamity Jane (Ellen Barkin) is fraught with unrequited passion, as well as a kind of careworn tenderness of two people desperately want to escape the lives they have built for themselves.

Wild Bill is a clever and often chilling deconstruction of the myths of the Old West. Hill was adept at distilling archetypal masculinity to its psychological essence (see The Driver), and while here it may seem a bit unfocused, as a character study it's absolutely terrific. The black & white flashbacks have not aged well, and now seem less artful and more gimmicky than anything else. And yet, the pain in Bill's soul remains palpable, partially due to Bridges' outstanding performance, but also thanks to Hill's keen understanding of what motivated him.

We may never know who Wild Bill really was (the circumstances surrounding his death and the man who killed him here are complete fiction), but the key aspect of Wild Bill is that perhaps he didn't even know himself. That's the film's quiet tragedy - it's not just an elegy for the myth of the Old West, it's an elegy for a time and a place that never really existed in the first place.