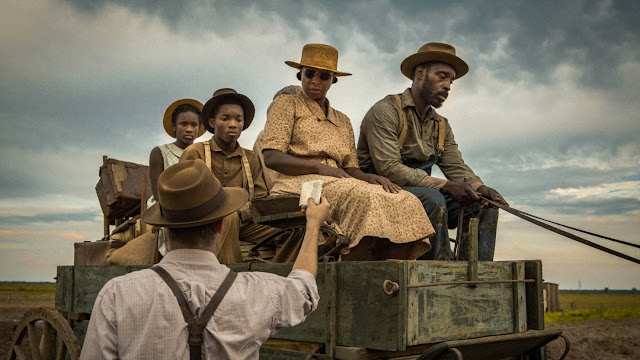 Set in Mississippi during World War II, Dee Rees' Mudbound is an intimate American epic that takes a hard look at race relations through the eyes of two families, one white, one black; one of which owns the land, while the other works it. Both families send sons off to the war, but their experiences, while not that different abroad, are wildly disparate upon their return home.

Life is hard for the white McAllan family. Saddled with a large farm they can't tend to on their own, and lorded over by a virulently racist patriarch (Jonathan Banks), they rely on the black Jackson family to do the lion's share of the work. The Jackson's oldest son, Ronsel (Jason Mitchell) heads off to war, and Jamie McAllan (Garrett Hedlund) joins up too, leaving his brother, Henry (Jason Clarke), and sister-in-law, Laura (Carey Mulligan), behind to take care of the farm.

Yet no matter how hard things get for the McAllans, things are always worse for the Jacksons. Never is this privilege clearer than when Ronsel and Jamie return from Europe at the end of the war. Jamie is greeted as a hero, while Ronsel is constantly reminded that he's back in Mississippi, and in Mississippi black people aren't allowed to use the front door. And when patriarch, Hap (Rob Morgan), breaks his leg, it falls to his wife, Florence (Mary J. Blige) to pick up the slack in order to ensure the McAllans' survival. 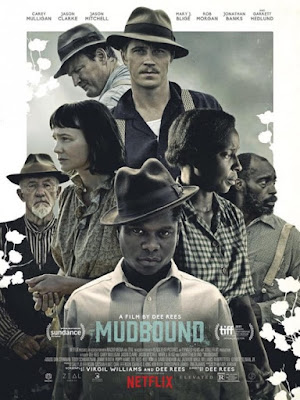 We've seen stories like this before. I was most reminded of Robert Benton's Places in the Heart (1984). Yet never has this story been told so indelibly from an African American perspective. Rees (who also directed the equally engaging Pariah) takes a hard look at white privilege and white fragility through the lens of a time that had no words for such concepts. The Jacksons are constantly paying for the McAllan's mistakes, toiling over land they will never be able to own themselves. They are brutalized for stepping out of line and expecting equal treatment. And they are faced with an entirely different set of challenges and struggles than the McAllans.

The McAllans aren't wealthy people. They would never consider themselves to be privileged. But that is just what they are, and Mudbound illustrates that point with a subtle yet firm hand. It often feels like Rees is unfolding a Great American Novel onscreen right before our eyes, turning the struggles of two discordant families who become  a microcosm for American society writ large. The finely appointed period detail and gorgeous cinematography are best experienced on the big screen, which makes it a shame that Netflix is the studio that ended up with the distribution rights. Yet Rees' talent still radiates off the screen. She takes Hillary Jordan's novel and turns it into rough-hewn cinematic poetry, even sometimes calling to mind the works of Days of Heaven-era Terrence Malick.

Mudbound takes a familiar story and makes it feel fresh, and is the perfect example of why we need more films directed by women and people of color. You'll never hear the words "white privilege" mentioned anywhere in the film, but its specter hangs over everything. It isn't so much a film about the destructive recklessness of whiteness as it is the blind naïveté of being the beneficiaries of structural racism designed to uphold white supremacy. It's an American epic for our time, an intricately woven period drama with a rich social conscience that never feels like a screed or a lecture, merely a lived-in portrait of racial imbalance that feels both urgent and essential.