William Oldroyd's feature debut, Lady Macbeth, based on "Lady Macbeth of Mtsensk" by Nikolai Leskov, is a hushed, chilly thriller about a young bride named Katherine who begins to exact revenge on the patriarchal structure that turned her into a sex object for her controlling lout of a husband. She soon turns to murder, with the help of her new lover, but as the list of victims grows, it becomes clear that she is heading down a much darker path. 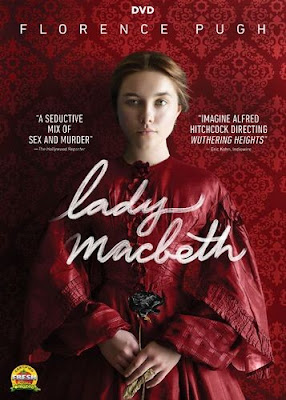 Like I Spit on Your Grave wrapped in a veneer of class and prestige, Lady Macbeth starts off as an old fashioned feminist revenge yarn. But then it gradually morphs into something else; a haunting examination of the slippery slope of moral decline. Unfortunately, it tries to have its cake and eat it too, and by casting Katherine as the Machiavellian figure of its title, without any real goal after the death of her husband, she just kind of becomes generically evil.

It's no fault of Florence Pugh, who turns in one of the year's most riveting performances as Katherine. As a woman learning to harness and control her own sexuality, she exudes a raw, natural magnetism that soon turns cold and distant as the toll of her sins weighs down upon her. I only wish that the film had been worthy of her talents. It sets itself up as a feminist piece, then ultimately undercuts itself by treating her as so one-dimensionally evil. She achieves her goals in the end, but for what purpose other than self-preservation? There's also just something unseemly about its use of Katherine's sexuality in service of an erotic period fantasy, even if her quest starts out as a reaction to that. Her steamy affair with a stable hand, which begins as a sexual assault, doesn't really do anything to rectify it. A subplot involving her black maid, who becomes mute with horror over Katherine's crimes, similarly goes nowhere, despite having tremendous thematic potential.

Lady Macbeth just doesn't seem to know what it's trying to say. It's a beautifully produced and atmospheric work through which Oldroyd shows great promise. But thematically it's a bit of a mess, as its protagonist goes from fighting the patriarchy to becoming a cold-blooded killer with no real motivation or thematic justification to do so.