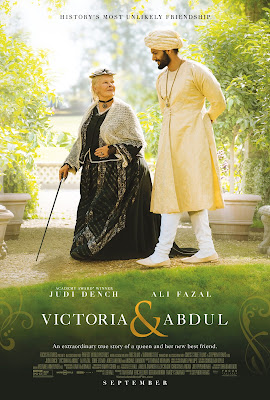 I'll admit, I'm a sucker for this kind of thing, and generally find Frears' particular bland of fluff to be the cinematic equivalent of comfort food. His latest film, Victoria & Abdul, is no different. Although it wades into potentially volatile waters in the form of Britain's historical oppression of India. Based on a true story, the film focuses on the last years of the life of Queen Victoria (Judi Dench, reprising her Oscar-nominated role from John Madden's 1997 film, Mrs. Brown), and her friendship with a visiting Indian servant, Abdul Karim (Ali Fazal). Surrounded by sycophants and hangers-on, the Queen becomes intrigued by this friendly, genuine man, the only one in her household who doesn't seem to want anything from her. He rises quickly through the ranks, and is appointed as her "munshi," a spiritual adviser who teachers her Indian languages, history, and Muslim practices.

This does not escape the notice of her family and staff, who become outraged at the idea of an Indian (and a Muslim to boot) having so much influence of the English sovereign, and they begin to plot to undermine Victoria's trust in Abdul so that he may be sent back to India.


One can't help but see echoes of the "magical negro" stereotype in Abdul, whose sole purpose in the story seems to be to help the figurehead of India's oppressive colonizer in her final days. Frears makes a cursory nod to India's independence in the film's postscript, but the inherent conflict of their relationship is largely ignored in favor of a feel-good story of interracial friendship. Yet, by all accounts, the story is mostly true, and it's undeniably heartwarming, even if the film glosses over the larger implications, casting Victoria's heir, Edward VII (Eddie Izzard) as a manipulative racist in order to give the film a clear villain without directly tackling the broader issues of Britain's subjugation of India.

Oversimplification of geopolitical issues aside, Victoria & Abdul is a light, charming entertainment that features yet another stunning performance by Dench. Seeing her return to the role for which she received her very first Oscar nomination is a thrilling experience, and Dench handles it beautifully, tackling Victoria at a very different time in her life - older, wiser, and more weary of the world around her. The film rides on her talents, and is all the better for it, as Frears steps back and lets Dench command the screen with her usual scrappy verve and a healthy dose of vulnerability. She is the film's heart and soul, and her relationship with Fazal's Abdul is actually quite moving, skirting the boundaries between maternal and romantic. It's a lovely story, well told and beautifully acted, and sometimes that's all we really need.