I've always been a Tyler Perry apologist. I'm sure I'll lose some film critic cool points for even saying this, but I think the man is an unheralded auteur with a clear and distinct cinematic voice. Boo! A Madea Halloween was Perry's biggest box office hit to date, but remains one of his least inspired films. In fact, the whole thing came to life because of a joke in Chris Rock's 2014 film, Top Five. Due to its box office success, we now have a sequel, Boo 2! A Madea Halloween, a disappointingly tired retread that brings no new ideas to the table, and runs on recycled jokes that quickly wear out their welcome. 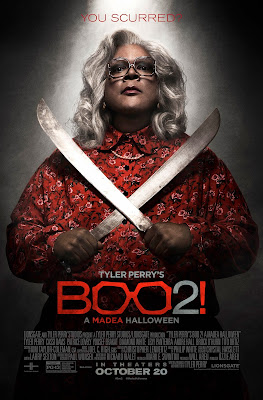 Perry once again stars as the indomitable Madea, her cantankerous brother, Joe, and her long-suffering nephew, Brian. The plot is much the same as the original; Brian's daughter, Tiffany (Diamond White), has just turned 18 and wants to go to the Halloween frat party that she was too young to attend the previous year. Brian once again puts his foot down, but his ex-wife, Debrah (Taja V. Simpson), lets her go anyway.


After the events of the last film, the frat is no longer allowed to have parties at the frat house, so they head out to Camp Derrick, a remote summer camp that was the location of a brutal massacre several years earlier. Not about to let Tiffany get away with lying to her father, Madea and Joe load up Aunt Bam (Cassi Davis) and Patti (Patrice Lovely) and head off to bring her home. But something spooky is going is going on at Camp Derrick; students are being picked off one by one, and Madea and the gang are about to come face to face with some more Halloween haunts.

Perry is clearly a talented entertainer, but Boo 2 is surprisingly sloppy work. Several obviously dubbed curse words stick out like a sore thumb, while Hattie, perhaps one of the most grating recurring characters in Perry's filmography, gets more screen time than ever before. A few more notably weak performances also drag down the proceedings, and give the film the overall feeling of being thrown together in a hurry. Perry is known for working quickly, often churning out two films a year, but Boo 2 feels more rushed than efficient. He dials the silliness up to an 11 and never lets up, with characters wildly mugging for attention and no straight role to bring balance to the warring over-the-top personalities. It's just an all around mess, joyless and uninspired where Perry's films are usually gleeful and lovingly crafted. There are a few laughs here and there, mostly when Perry gets to improvise with himself and Davis' Aunt Bam. Seriously, these two are great together - more of them and less of the kids would have taken this film a long way. Instead, we get a slapdash mess that will probably only please Perry's most hardcore fans, while leaving most everyone else perplexed and unamused.