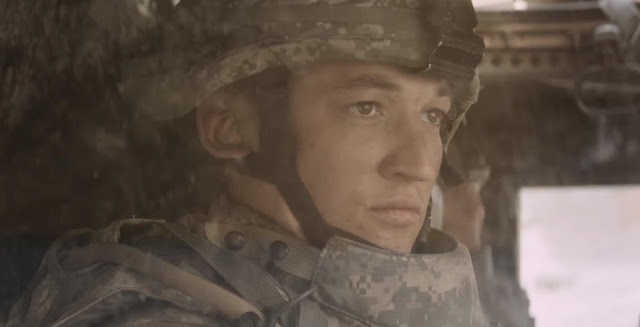 Post-Traumatic Stress Disorder is an important, albeit an oft-overlooked, issue facing American veterans. It is something that isn't talked about nearly enough, so a film like Thank You For Your Service is in a unique position of being able to start a national dialogue about an affliction that affects hundreds of thousands of our soldiers, and perhaps even more who have never been officially diagnosed. Unfortunately, while its heart may be in the right place, Thank You For Your Service just isn't good enough to carry the weight of the issue it seeks to explore. Average at best, dull at worst, the film plods along without ever really reaching a satisfying emotional crescendo. 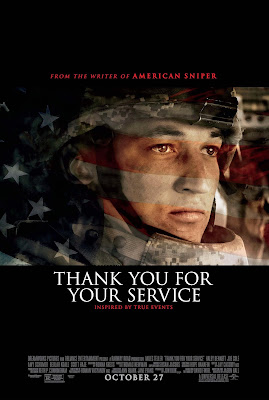 It is inspired by a true story about four young men who return from Iraq, each feeling like a different person than who they were when they first left home. Solo (Beulah Koale) is a Samoan career soldier who is obsessed with returning to the war, and turns to drugs when he is unable to get help from the VA. Will Waller (Joe Cole) returns from Iraq to discover that his fiancee has left him. And Adam Schumann (Miles Teller) is a war-weary sergeant who puts on a brave face, but is haunted by the memory of a injured comrade he dropped (Michael Emory) while carrying him to safety. Away from the trauma of war, each struggles to re-integrate themselves into civilian life, each hiding injuries that no one can see and no one understands.

Perhaps the most important aspect of Thank You For Your Service is its depiction of PTSD as a war wound. It may not be visible, but it is just as debilitating. In one of the film's most heartbreaking scenes, Solo wishes that he had lost an arm or a leg in the war so that people could understand that he had been injured. The film goes to great lengths to depict how uncaring both the military and civilian worlds can be, and how few people understand what these men are experiencing. Unfortunately, it is saddled with a weak script and lackluster performances that never give it the emotional punch it needs. Teller is reliably strong, but one never quite believes that these men are actually friends. The characters around him are surprisingly bland, and the presence of a miscast Amy Schumer as a grieving war widow proves more distracting than anything else. She is also stuck with some of the film's worst dialogue, which ends up doing her no favors.

PTSD is something that deserves to be discussed seriously. But Thank You For Your Service feels like a perfunctory exploration of the issue, scratching the surface but never really diving deep. Even the title feels like a cursory pat on the back rather than the heartfelt tribute it wants to be, even if it's ultimately a grimly ironic sentiment in context. It never allows us to become invested in its characters, and for a film about mental trauma it spends surprisingly little time exploring who these characters really are. They may feel like hollow shells, but the movie doesn't need to treat them that way. It's an unfortunate missed opportunity that just doesn't do its subject justice. It's certainly serious-minded, but it ultimately coasts on fumes rather than really giving it the emotional weight it deserves.