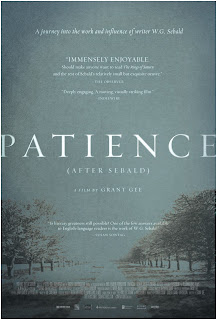 Grant Gee's documentary, Patience (After Sebald), may be the most aptly named film of the year. It is a film that requires a great deal of patience in order to enjoy, but it is not without its rewards.

Although one's enjoyment of Patience may stem from one's appreciation of writer W.G. Max Sebald, whose book, "The Rings of Saturn," provides the inspiration for the film. A meandering collection of observations about the landscape and people of Europe, "The Rings of Saturn" is a lyrical and rambling account of Sebald's journeys through the countryside. In Patience, Gee attempts to recreate that journey through observations by authors and scholars, as well as excerpts from Sebald's work hauntingly read by Jonathan Pryce. The result is a film as frustrating as it is beautiful, as aimless as it is searing.

It's intentionally aimless, of course. That is, after all, part of the appeal of Sebald's stream of consciousness writing, which has been compared to that of Virginia Woolf, whose writing often evoked the seemingly random, breathless ramblings of a mind in motion.

Not so much a typical documentary, Patience (After Sebald) is an impressionistic tour through a work of great literature, retracing Sebald's steps to recapture the textures and feelings of "The Rings of Saturn." Filmed in striking black and white that recaptures the grainy photographs that Sebald was so fond of, the film  acts like a kind of tour through Sebald's mind. It is at once an appreciation of his work and an exploration of its meanings, digging deep into its origins and the history that informed it. For those who knew little of Sebald before coming to this film (a group of which I am admittedly a member), Patience will perhaps be something of an enigma. But it is an enchanting enigma nonetheless. The uninitiated are likely to come out knowing just as little about Sebald as they did when they went in, but that's not necessarily a bad thing. This isn't a biographical or historical documentary, it's a poetic one - a free form think piece that is often just as impenetrable as it is enrapturing.

By pairing Sebald's words with such gorgeous imagery, Gee creates something deeply sublime.  It is a beautiful puzzle, this poem on film, and while its aimless structure may not be fully avant garde enough to justify its own lack of direction, it consistently engages the audience to explore its hidden treasures. For those with the patience to seek its treasures, Patience will be something special indeed. It pushes the documentary structure into a whole new form, something thought provoking and cerebral, baffling and transcendent, and ultimately an artistic journey worth taking.