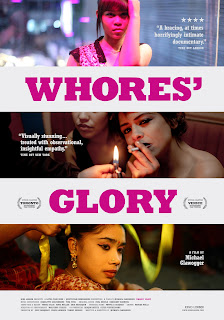 The term "whore" is perhaps one of the most confrontational and even derogatory descriptions of practitioners of the world's oldest profession. Pairing the term with the word "glory" is an even more jarring combination, suggesting something seedy, even perverse. The title, Whores' Glory, is a seemingly incongruous one, and indeed it is not without its ironies.

You'll be hard pressed to find any glory in Michael Glawogger's eye opening documentary, but you won't find any judgement or false sentiment either. Whores' Glory is as clear-eyed and objective a film as we are likely to get. Unlike many contemporary documentaries, Glawogger doesn't approach his subject with a goal of social change - his purpose is to observe and document, allowing the stories of prostitutes from across the globe speak for themselves. The rest is up the audience, as it should be. The result is something at once disturbing, mesmerizing, and strangely moving, a mosaic of the modern state of the sex industry that makes impersonal, anonymous sex feel personal and even intimate. 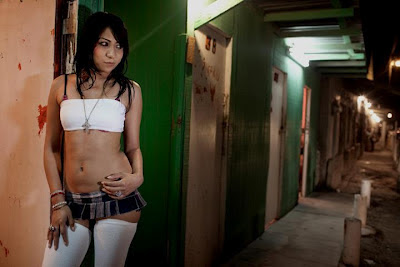 Told in triptych style, and set to a fantastic soundtrack featuring artists such as PJ Harvey, Whores' Glory examines organized prostitution in Thailand, Bangladesh, and Mexico, taking us on a behind the scenes tour of an underground industry that outsiders are rarely privy to. In Thailand, girls line up behind a two-way mirror, and men choose them from the other side like pieces of meat. In Bangladesh, women refuse to perform oral sex because their mouths are used to recite the Qu'ran. And in Mexico, men cruise the streets of the red light district known as the Zone, where each prostitute has her own room in which to host clients. The contrast between the three locations is striking, but even more remarkable are their similarities. Glawogger digs deep into their hopes and dreams, creating a fascinating portrait of women who sell themselves, often because they have no other choice. One madame offers a bleak picture of life for her young daughter, who will likely be forced into prostitution because her family has no money and no one will want to marry her.

It's the moments like that that make Whores' Glory so compelling. It shows us a world where prostitution is not taboo, and is even treated as perfectly normal. We meet clients who candidly describe what they look for in a prostitute, and even observe a few of their trysts. From the high class brothels of Thailand to the slums of Mexico, Whore's Glory treats is subjects with a quiet dignity, never judging them for their actions while honoring the person beneath the surface. Some of its most intriguing moments come from interviews with the prostitutes who candidly reveal their hopes and dreams of escape, many of which we know will never be fulfilled. That is both the tragedy and the draw of Whores' Glory, a refreshingly frank and powerfully rendered documentary that probes the depths of a subject often swept under the rug. We are a fly on the wall to a world often discussed but rarely explored, as Glowagger shines a light in the darkness on the seedy,gritty, shocking world where sex is little more than a business.