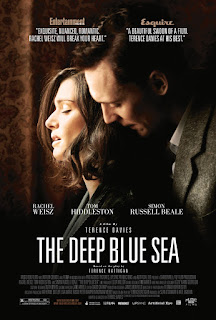 It is clear right from the start of Terrence Davies' The Deep Blue Sea that something remarkable is in store. With a swell of Samuel Barber's "Concerto for Violin and Orchestra," Hester Collyer (Rachel Weisz) takes a handful of pills, opens up the gas in the fireplace, and lays down on the floor to die.

Opening with a sweeping tracking shot of a quiet, ramshackle British street, The Deep Blue Sea seems to be channeling the great Douglas Sirk, and the similarities don't stop there. The film is drenched in Sirkian flair from the first moment to the last, awash in a kind of exquisite sadness embodied by the inner pain of its lovelorn protagonist.

"Beware of passion, Hester." Her mother in law admonishes her. "It always leads to something ugly." Those words, spoken to her at an awkward weekend getaway (in which she and her husband must sleep in separate beds and his mother's prudish request), seemingly hammer the last nail in the coffin to her loveless marriage to the respectable but bland Sir William Collyer (Simon Russell Beale). Little more than an arranged marriage, Hester has instead found passion in the arms of former WWII pilot, Freddie Paige (Tom Hiddleston), something she craves above the "guarded enthusiasm" prescribed by her mother in law and embodied by her husband.

The passion she shares with Freddie, however, is extremely volatile, ranging from heated romance to drunken fights. Caught between a dull, predictable existence with her husband, or a life of fiery unpredictability with Freddie, Hester attempts to take her own life. When Freddie learns of her failed suicide, he is enraged and breaks off the relationship. It is then when her husband walks back into her life, a bland but steady rock of strength in a time of great difficulty. Hester is once again faced with an impossible choice, choose the unexciting reliability of the man she married, or continue to pursue an uncertain future with a man whose lust for life makes him as unreliable as he is exciting. She is caught between the devil and the deep blue sea, and no matter what she chooses, happiness may remain forever out of her reach.

Based on the play of the same name by Terrence Rattigan, The Deep Blue Sea is a deeply perceptive exploration of grief and sadness as seen through prismatic reflections of memory. Shot through a kind of smoky haze, the film itself seems to be filtered through Hester's own recollections of a lifetime of regret. Not only is Davies channeling Sirk in his beautifully melancholy depiction of romantic angst, but there are elements of David Lean's masterpiece, Brief Encounter, here as well. Davies says so much by saying so little, and like Lean's towering work, The Deep Blue Sea explores romantic angst of the married middle class in deeply introspective ways.

But perhaps even more so than Sirk and Lean, Davies owes a great debt to Rachel Weisz, whose extraordinary performance is truly something to be celebrated. Weisz embodies such a painful sense of internalized anguish that it's almost palpable, her eyes conveying such uncertainty and sorrow with heartbreaking subtlety. While Weisz may be the glue that holds Davies' tale together, his powerful screenplay and assured direction smartly stay out of the way, never calling unnecessary attention to themselves while enhancing the film at every turn. Davies has crafted something truly outstanding, an evocative and perceptive exploration of the conflicting desires of the human heart and the consequences of the choices we make.

That dichotomy between the heart and the head is an eternal human affliction, a constant battle between our own desires and our better judgement. The Deep Blue Sea manages to be both swooningly romantic and achingly sad, painful and cathartic, beautiful and devastating. Davies never exploits the tragic nature of the story, instead opting for something more soul stirring and even strangely uplifting. In the end he leaves us with a lingering sense of wistful regret, but also a glimmer of hope. It's an awful lot like life itself; hope tinged with regret,the constant cycle of ups and downs, joys and sorrows, triumphs and tragedies, that make up the seemingly endless game of human existence. The Deep Blue Sea is a rare breed, a haunting and intelligently drawn love story that lingers in the memory like a wisp of smoke caught in a sunbeam, powerfully embodying the labyrinthine complexities of the heart in something as deceptively simple as a glance.