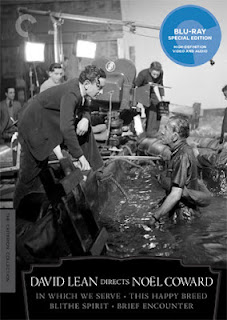 There are few partnerships in the history of cinema quite like the brief but important collaboration between director David Lean and playwright Noël Coward. While legendary filmmakers Michael Powell and Emeric Pressburger were already established as a winning team, and were embarking on what would be the richest period of their career (yielding a string of masterpieces such as The Life and Death of Colonel Blimp, A Matter of Life and Death, Black Narcissus, and The Red Shoes), another filmmaking pair entered the scene that would ultimately produce an arguably more famous pair.

The difference between the two teams is that Lean and Coward were perhaps more famous separately than together. Coward was already an established and successful playwright, and Lean would go on to be more well known for his legendary epics such as The Bridge on the River Kwai and Lawrence of Arabia. Lean's name has come to be synonymous with a certain kind of epic filmmaking, while Coward represents a very British brand of upper class wit. Their initial pairing was as unlikely as it was seminal, and their collaboration yielded four excellent films before they parted ways in 1945.

In 1942, Britain was in the heat of World War II, and the Blitz was crumbling morale on the home front. Coward, who had long harbored a certain disdain for the cinema, decided to make a propaganda film to honor the soldiers and boost morale. Film, of course, could reach a much wider audience than could the theatre, but Coward had no cinematic experience, and therefore turned to Lean, then a young editor who was quietly making a name for himself as a go-to guy on the quota quickie circuit to fix problem films. Neither had never directed a film before, and planned to split directorial duties, with Lean in charge of composing the shots and directing Coward (who starred as Captain Kinross), while Coward would direct the rest of the cast. As it turned out, Coward was more than happy to step back and let Lean work his magic, and while the two share directing credit the resulting film was mostly the work of Lean.

In Which We Serve became the film that launched the career of one of the cinema's most legendary auteurs, and what an auspicious beginning it was. A stirring portrait of the crew of the Torrin, a British warship that is sunk in the Mediterranean whose survivors reflect upon their lives while floating in the ocean waiting to be rescued. The film actually spends much more time on the home front than in the war itself, and in so doing creates a portrait of British resilience as a reminder of what these men are fighting for. Unlike many of the propaganda films of the era, In Which We Serve displays remarkable restraint and subtlety, focusing on characters rather than broad archetypes and cheap sentiments. You'll find no anti-German sentiments or cloying nationalism here, just a quiet dignity in the face of overwhelming danger. That's what makes it so moving - it never feels as if it's trying too hard to push its audience too hard. It established Lean as the a director to watch, and foreshadowed his later prowess at focusing on intimate themes against a grand backdrop.

1944's This Happy Breed served a very similar purpose as In Which We Serve, although without the overt wartime plot. A kind of suburban variation on Coward's upper class family drama, Cavalcade (which had been adapted into an Academy Award winning film 11 years prior), This Happy Breed follows a middle class family from the end of WWI to the beginning of WWII, beginning with the triumph of victory and ending on a note of uncertainty as the clouds of war once again cast their shadow over Europe. Opening with a sweeping shot of endless rows of identical houses, the film quickly establishes its protagonists as a kind of archetypal British family. They could be anyone, and were specifically crafted to be readily identifiable to the majority of contemporary British citizens. They grow up before our eyes, have personal triumps and suffer painful setbacks. But despite their problems they represented exactly what was being fought for overseas - the very existence of the British way of life. It's a powerful piece that hammers its message home without any kind of overt propagandizing. It may not be set during the war, but it is unmistakably a work of wartime angst.

By contrast, 1945's Blithe Spirit is a work of pure escapism. For a Blitz-weary nation, a surprisingly dark comedy that makes light of death may seem like a hard sell, but the film was a hit and went on to win an Academy Award for its ghostly special effects. Coward believed Blithe Spirit to be the best thing he had ever written, and it certainly is a sprightly, witty thing. Rex Harrison stars a Charles Condomine, a wealthy author who arranges for a medium to entertain his guests at a dinner party in order to conduct research for his latest novel. But when the bumbling medium accidentally conjures up the ghost of his dead first wife, Elvira (Kay Hammond), Charles finds his life, and his relationship with his second wife, Ruth (Constance Cummings) thrown into disarray. Blithe Spirit may be a trifle, but it's a glorious trifle, and features one of the great comedic roles in English theatre - the medium Madame Arcati, here memorably embodied by a deliciously batty Margaret Rutherford. It may be a minor entry in Lean's canon (comedy was not his strongest suit), but it remains a strong adaptation of Coward's most enduring work.

The real jewel of this collection, however, is 1945's Brief Encounter. Based on Coward's one act play, "Still Life," Brief Encounter is the heartrending story of two married people whose chance meeting on a train platform turns into a fleeting and ultimately doomed love affair. Celia Johnson (who would later be so memorable opposite Maggie Smith as the dour headmistress in The Prime of Miss Jean Brodie, directed by Lean's frequent cinematographer, Ronald Neame) gives a remarkable performance as Laura Jesson, the lovelorn protagonist who meets Dr. Alec Harvey (Trevor Howard) while waiting for a train, and is never the same. The first time we see them is actually the last time they meet, and the rest of the film shows us how they came to that moment. By the time we finally realize what the first scene actually was, Lean has drawn us in and shattered our hearts. Yes it is ultimately a film about two adulterers, but Lean treats it with such sensitivity and the performances are so earnest and authentic that its nearly impossible not to become wrapped up in their plight. Johnson is quoted as saying that acting in Brief Encounter was almost like being in a silent film, as much of the dialogue is in her head. But what she does is far more subtle that silent film acting. She says so much with her eyes, and Lean takes us to a place of deep introspection, saying a great deal with very little. Here, Lean solidified his mastery of emotional intimacy even without the epic scope, and crafted what many consider to be one of his finest achievements.

Brief Encounter would be his last collaboration with Coward, before he moved on to his own solo career, and Coward went back to the theatre. But they left behind four indelible films that launched the career of one of cinema's great masters and offer a window into the artistic evolution of two legends. Criterion's box set is a sumptuous presentation of these films in their finest quality. The gorgeous Technicolor photography of This Happy Breed and Blithe Spirit really pops on blu-ray, but it is the smoky black and white of Brief Encounter that leaves the strongest impression. Its aching beauty is something to be cherished, and Criterion has gone out of its way to honor all four of these classic films as they have never been seen before.