A few months ago I was contacted by a Warner representative about a new home video program called Blu-ray Elite. I indicated my interest, but when I didn't hear back for a while, I assumed that the program had either fallen through or been shelved. 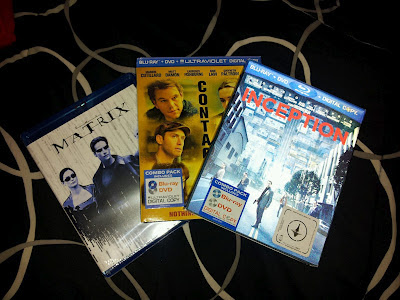 So I was delighted to learn a few weeks ago that the program was indeed close to realization. The concept is simple - Warner chose a select group of bloggers and fans to send periodic blu-ray discs to as a kind of home video social network marketing program - get the discs out there and get the conversation started.

Yes, I am a critic, and I value critical integrity above all. If I don't like a film or something about the presentation I will say so. I've bee receiving screeners and promo discs long enough that I won't gush over a movie just because I got a free copy of it. But I certainly appreciate being included in this new program, and am excited about its future. Anything I post about the films on Twitter will be accompanied by #blurayelite and #sp (sponsored post) to keep everything transparent and separate from my critical work.

The first round of discs came today, and included The Matrix, Contagion, and Inception. An eclectic mix, but all worthy of revisiting (coincidentally, I didn't already own any of them). I'll be reporting from time to time on the progress of the program and the movies that I watch, so stay tuned. You'll be hearing about this a lot around the blogosphere for the next few months.
Email Post