Blu-ray Review | "The Girl on a Motorcycle" 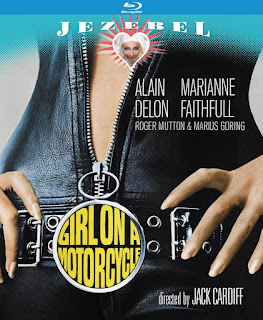 When one thinks of Jack Cardiff, one immediately thinks of his great works of cinematography on films such as The Red Shoes and Black Narcissus.  Few ever think of him as a director, although he had several directorial credits to his name.

Cardiff photographed as well as shot the film, so it's filled with striking imagery and flashy colors (especially in its out of left field moments of acid-trip like insanity). Sadly the film itself leaves much to be desired. It is filled with long sequences of motorcycle driving where very little actually happens. Rebecca rambles on at length in her own mind, musing over events and narrating her actions with a kind of dreamy detachment. But for an exploitation film there is precious little sex. The exploitation elements seem to stem form the motorcycle itself, which represents the very image of 60s era rebellion.  It's almost a purely visual film without any real substance, even of the trashy kind one has come to expect of films of this kind. What makes it worth it is Cardiff's unmistakable visual sense (and a commentary track by Cardiff himself, which is a gem indeed). Fans of Cardiff's work may find The Girl on a Motorcycle to be an interesting, if hardly essential, facet of his career, but fans of exploitation cinema may find the film uneventful and ultimately rather bland.