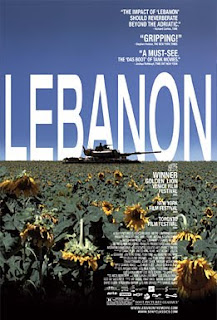 "War is hell" is a mantra that has lost much of its power, cinematically speaking, mostly due to the ubiquity of the subject. It's not a new idea by any means, but especially since the release of Steven Spielberg's infamously graphic Saving Private Ryan in 1998, the sheer number of war films that have been released is enough to make audiences go numb to the carnage.

More than that, it is enough to make the message get lost amid the noise. War is hell, everyone knows that. But for movie audiences, the message has been heard so many times that its impact has been dulled. That is why Samuel Maoz's Israeli war drama, Lebanon, feels like such a kick in the gut. Rather than bludgeon the audience to death with images of carnage and destruction (although there is plenty of it), Maoz plunges us directly into the heat of the action, forcing us to see war through the eyes of the soldiers by completely confining the camera's point of view to inside the belly of a tank. 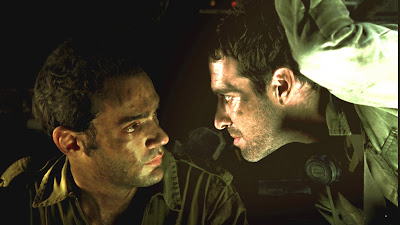 Not unlike Wolfgang Petersen's seminal 1981 submarine thriller, Das Boot, the audience only sees what this small tank crew is able to see, our only window to what is going on outside is through a periscope. The film chronicles the first day in Israel's 1982 Lebanon war through the eyes of a single tank crew, whose mission is to venture into a Lebanese town already bombarded by the Israeli air force. But what at first seems to be a routine mission quickly devolves into a nightmare, as it soon becomes clear that the air force's earlier attack has done little to dissuade the opposition.

Trapped in a hostile city and cut off from their own men, the crew find themselves in a veritable hornet's nest, but the enemy on the outside isn't nearly as dangerous as the one on the inside, as the claustrophobia of the tiny tank cab begins to take its toll on their minds. These four men, who have never seen war, are suddenly thrust together in the most hellish environment imaginable, with not only their sanity, but their lives on the line. 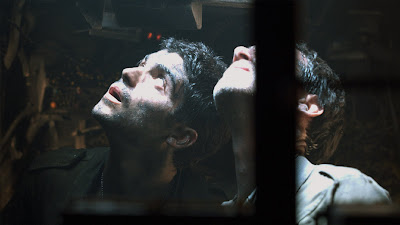 Oshri Cohen as Hertzel and Zohar Strauss as Jamil Courtesy of Sony Pictures Classics
Maoz masterfully uses POV to create a fifth crew member inside the tank - the audience itself, conjuring a powerfully suffocating atmosphere. The only respite comes in the form of two bookending shots of a field of sunflowers, the latter which has become the film's most recognizable image. It is a startling contrast - the ugly metal killing machine set amid such natural serenity. That kind of juxtaposition drives home Maoz' central thesis of war's essential absurdity. It's not a new idea by any means, but so brilliantly designed and sharply edited is this film that it takes an old theme and breathes into it a new life.

Lebanon is a war film that comes by its message honestly. You will find no flag waving here, no political grandstanding or needless pontificating, just the ugly, messy reality of grunts in war. One can almost smell the blood, sweat, and urine in the heat of the tank cab amid the crew's fear and panic. Every frame is saturated with a palpable sense of anxiety, turning the screws of tension as the crew descends slowly into madness. It's an intelligent and compelling war film, one that defies its genre's conventions and gives way to something that is both viscerally thrilling and spiritually transcendent. Maoz deftly hits all the right notes and delivers a haunting work that stands as an essential piece of Israeli cinema.

Anonymous said…
It is rather interesting for me to read the article. Thanks for it. I like such themes and everything that is connected to this matter. I definitely want to read more on that blog soon.