The sad reality for many documentary filmmakers is that having their films released theatrically is not always feasible, given their generally low box office potential . But thanks to the good folks at Cinema Libre and other independent studios, documentaries can find new audiences through DVD releases and grassroots educational campaigns.

Two such films, For My Wife and Water Wars will have their DVD premieres on August 31, 2010 from Cinema Libre, the studio that brought The End of Poverty and Oliver Stone's South of the Border to the big screen.

FOR MY WIFE (David Rothmiller & LD Thompson, Not Rated)

For My Wife is an especially timely doc about Charlene Strong, a woman who lost her partner, Kate, in a tragic flood, and faced many challenges, heartache, and discrimination by hospital employees and funeral directors because they were not legally married or related by blood. But instead of sitting idly by, Charlene took matters into her own hands and joined the crusade to bring benefits to same sex partners that would make sure that no one would have to suffer as she did again. 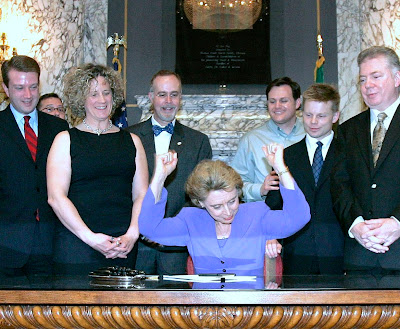 Charlene Strong with WA Governor Chris Gregoire as she signs the Domestic Partnership Registry Bill into law in “for my wife…”
In light of the recent Proposition 8 ruling in California, For My Wife feels like it comes along at the perfect moment, as LGBT issues are taking the forefront in the national spotlight, especially concerning same sex marriage. Charlene makes a passionate case and puts a human face on the debate that is undeniably moving. The climactic debate on the floor of the Washington state Senate is especially powerful, but the film sort of loses its way after that. It sets out to make the key point that the battle is far from over and the story continues, but it feels as if it has no definitive ending, following Charlene's crusade after her victory in her home state of Washington, but there just isn't that much to cover. It's clear that it would have made a better documentary short than a feature, but it's hard to deny its subject's timely power. This is a story that needs to be told as much as it needs to be heard. And as long as people like Charlene Strong keeps speaking up and putting forward an identifiable and human face on the challenges faced by LGBT Americans, then hearts and minds will continue to be changed, and as such For My Wife demands to be seen.

Documentaries often fall into the trap of being all information and no flair, and Water Wars is one of those films. It's a rather straightforward educational doc about the water crisis in Bangladesh, whose rivers are being dammed up in India, causing widespread drought in the dry season and flooding in the rainy season. What water they have is often poisoned with arsenic. The film examines the political standoffs caused by access to water in Asia, which is a conflict many believe will be the cause of World War III.

For such a potentially impactful topic, one might expect a film with a little more tension or a dramatic call to action, but instead it feels rather mundane, even with narration by Martin Sheen. It's the kind of informational doc that would be right at home in a high school world politics or science class, and as such will serve its purpose well. It's an important topic, and while it deserves a documentary that isn't this dry, it will do in the absence of more widespread coverage.

Both For My Wife and Water Wars will be available on DVD August 31 from Cinema Libre and are now available for pre-order.