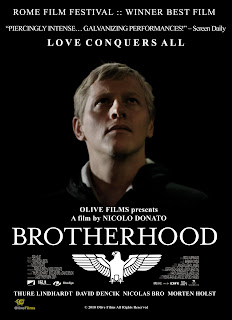 The idea of gay Nazis is about as strange and foreign as the idea of gay cowboys, if not more so. While the image of the cowboy as presented in Ang Lee's tenderly subversive Brokeback Mountain has long been equated as the ultimate symbol of masculinity in American culture, the image of the Nazi stands at an even greater opposition to the idea of homosexuality. Not only did the most infamous hate group of all time hunt and kill Jews, but they also actively went after homosexuals, destroying anything that did not fit their insidious ideal.

Therefore the idea of a gay Nazi seems even more implausible than the idea of a gay cowboy. But as Brokeback so memorably demonstrated before, sometimes love can be found in the most unlikely of places - in the case of Nicolo Donato's Brotherhood, right in the middle of a violent neo-Nazi group in Denmark.

To show what is at stake, the film opens with the brutal beating of a young gay man, the victim of a set up by the group designed lure him with the promise of sex. As we learn later, the group preys on the young ones who are not yet out of the closet so they are less likely to go to the police for fear of exposing their sexuality. This is the oppressive world in which the story takes place, where any hint of homosexuality is attacked swiftly and violently.

Our guide into this world is Lars (Thure Lindhardt), a Danish soldier who is denied a promotion after accusations by some of his men that he made unwanted advances on them. Depressed and adrift without direction, Lars falls in with a small group of neo-Nazis, led by their charismatic and persuasive pied piper, Michael ‘Fatso’ (Nicolas Bro). His intelligence and well spoken manner endear him to the membership, where he quickly rises through the ranks, and is eventually offered full membership in the group, much to the chagrin of another more senior member, Patrick (Morten Holst). Still living with his disapproving parents and with nowhere else to go, Lars is offered lodging at the group's safe house, which is under the care of Patrick's older brother, Jimmy (David Dencik). Jimmy is at first distrusting of Lars, still bitter over his brother's being passed over for membership in favor of this young upstart. But living in close quarters together, the two discover common ground. So much common ground in fact that their friendship becomes something much deeper, romantic even. Soon, Lars and Jimmy have given into their undeniable attraction for each other, but as they do, they must come to terms with their own bigoted beliefs, as well as the dangerous repercussions from their peers. Because in their world, their love isn't only a crime - it's a capital offense.

There's plenty room for treacle here, but Donato walks a very fine line between tenderness and danger. Brotherhood offers its characters no easy solution nor does it pander to its audience. In fact is a gritty and incisive examination of the inherent homoeroticism of close all-male organizations, especially hate groups - hence the title, Brotherhood. In any exclusively one gender group there is always a chance for same sex relationships or sexual tension, but there is something especially deep and primal about male bonding, especially since the emotions and feelings of men are much more buried than those of their female counterparts. Donato gets right to the bottom of this, using the relationship between Lars and Jimmy to explore much larger themes of how personal feelings clash with deeply held beliefs, even those that are imposed by close friends or family, as well as preconceived notions of masculinity.

Make no mistake, Brotherhood is a melodrama, but it's a skillfully executed one. The relationship between Lars and Jimmy never feels forced, but rather an organic extension of the situation in which they find themselves. It is an alternately delicate and edgy drama, finely acted and hauntingly realized. Donato finds great beauty in a very dark and dangerous world, unearthing something honest and real in the shadow of great evil. Brotherhood is a shining and unironic example of love overcoming all obstacles that never feels manipulative or goofy, and one of finest works of queer cinema to come along in quite some time.

Sam Juliano said…
Most interesting review on a potentially fascinating subject! I may well be checking this out at the Cinema Village over this weekend.
9:35 AM

Sam Juliano said…
As it turns out you are dead-on with the rating here. This was largely a compelling work.
12:47 PM

Matthew Lucas said…
Thank you both! Glad you enjoyed it Sam, and Britni, I hope you get the chance to see it. It's worth seeking out.
11:14 PM