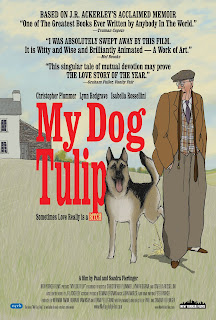 There have come to be a set of expectations when it comes to movies about dogs. They usually involve children, the dog usually has some extraordinary qualities, and pretty much without fail, the dog dies in the end.

My Dog Tulip, the beguiling and kindhearted new animated film by Paul and Sandra Fierlinger, is a completely different breed of dog film. Based on the acclaimed memoir by J.R. Ackerley, My Dog Tulip is a deeply felt love letter from a man to his dog, tracing their 16 year relationship together in the twilight of his years.

Adopted as an 18 month old puppy, the incorrigible Alsatian, Tulip is nothing particularly special, as dogs go. She barks constantly, gets into things she shouldn't, and generally causes trouble. But despite all her innocent transgressions, she is fiercely loyal to her master, and while she causes him embarrassment after embarrassment, his affection for her only grows. 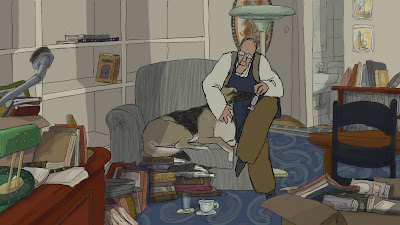 CHRISTOPHER PLUMMER (Voice) as J.R. Ackerley with TULIP
Tulip isn't the kind of dog who is going to fetch the mail, rescue a child, or possess incredible senses. She is simply an old man's faithful dog, an unlikely best friend, and he treats her with the utmost affection, even in observing her toilet habits or trying in vain to breed her. Ackerley (voiced by the incomparable Christopher Plummer) serves as our narrator, almost as if he is a neighbor simply telling us about the antics of his beloved dog on a lazy Sunday afternoon. The droll wit and frankness of his words become a kind of poetry, especially when accompanied by the film's charmingly simple animation and stunning use of color.

The film's ending is never really in question, but the filmmakers wisely choose not to make it about the death. My Dog Tulip is, above all, a celebration of the life of a beloved friend. And when her time finally comes, the Ackerley barely makes a mention of it, treating it instead as a natural part of life and is grateful for the years they spent together. Thus the film becomes not another sad, weepy tale, but a warm and uplifting ode to friendship, choosing not to wallow in death and despair. 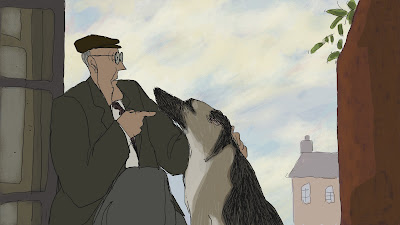 CHRISTOPHER PLUMMER (Voice) as J.R. Ackerley with TULIP
For all its potential as a heartbreaking weepy, My Dog Tulip buoys itself with a kind of timeless charm. Ackerley's love and adoration for Tulip is evident in every frame. Paul and Sandra Fierlinger have lovingly brought Ackerley's memoir to the screen with the same kind of tenderness and humor that Ackerley himself might have done, and they have assembled a top notch voice cast to bring it to life. Plummer is joined by Isabella Rossellini the late Lynn Redgrave who each bring their own unique charisma.

My Dog Tulip takes a familiar sub-genre and turns it into something fresh and original. This is no typical "boy and his dog" movie, this is a joyous and warmhearted work of art. For those with open hearts and a love of animation, this will be a real treat, but for anyone who has ever had a dog in their life, My Dog Tulip will be a touching and life-affirming reminder of why dogs have earned the moniker of "man's best friend."