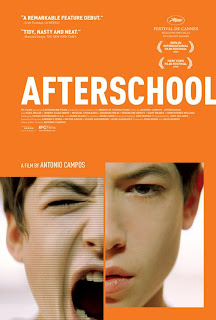 Living in a post High School Musical world, movies about high school (and teenagers in general) tend to have a very similar aesthetic and a specific set of expectations. In other words, most high school films are made especially for the high school crowd of the MTV generation, where fast editing stimulates short attention spans and current pop songs and power ballads replace anything resembling real emotion. They simplify the complicated teenage world into cardboard stereotypes of jocks, nerds, goths, cheerleaders, and any number of other typical high school cliques. It is both a disservice to the real high school experience and to the intelligence of the audience.

Into this world steps first time feature director Antonio Campos, who wanted to eschew the traditional trappings of the high school film, and capture a deeper truth usually missing in such films. The result is Afterschool, a haunting, if occasionally self-conscious, debut film that calls to mind the work of Michael Haneke, and more specifically his 2005 film, Caché.

Jean-Luc Godard once said: "The cinema is truth at 24 frames per second." If that is true, what does that say about video? In Afterschool, Campos sets out to answer that question, taking us into an elite New England prep school as seen through the eyes of Robert (Ezra Miller), a clearly troubled, shy young man with an obsession with reality, or at least the kind you find in viral video. Robert spends his time watching fight videos captured on cell phones, and perhaps most tellingly (and most dangerously), extreme pornography - the kind where women get choked and frightened by mysterious men behind the camera. He likes it because the fear in their eyes is real, and reality is what he is all about.

So when the school announces that they are starting a film and video club, it seems like just the kind of opportunity he was looking for to get involved. That is until one afternoon, while he is filming shots of an empty hallway to serve as establishing shots for a class project, Robert accidentally captures the violent deaths of two beloved classmates, whose unexpected death from poison laced cocaine rocks the sheltered school. But the fact that it was captured on video opens up a whole new dimension to their deaths, but does video always tell the truth? 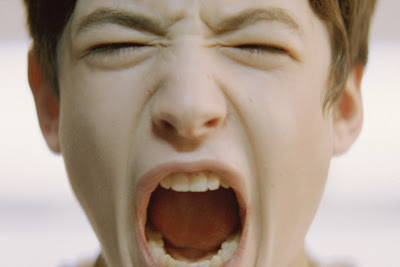 Campos composes his film with a series of dispassionate, static long shots, with very few edits, creating a sterile, unnerving objectivity. The camera is unmoving and unblinking, capturing the events in the area it was aimed to capture, but little more. The mise-en-scene seems both controlled and off-kilter. The camera stays in one position, but the actors move in and out of it, often at unnatural angles, making the action both disorienting and frustrating. Which of course is how it would be, if someone just set up a camera and left everyone in the room to their own devices, unaware of the camera or its position. Through this style, Campos hopes to uncover an air of truth, but only half succeeds.

Robert's characterization is wildly scattershot, and Campos admits to knowing little about the character's psyche. This is clearly a troubled kid with a lot of issues, but what do they really say about America's obsession with viral video? Has he been desensitized, viewing atrocities at a safe distance through the computer? Is video truth, or a false sense of truth? The questions are raised but given little consideration, and one can't help but wonder if Afterschool is little more than a hollow exercise in style, that never overcomes its own self-consciousness? It is undeniably chilling, even if the slightly gimmicky ending pushes it a bit too far. But its impact seems muted by its own coldness. It is a noble experiment, but one that I feel ultimately does not succeed in its aims. That being said, Campos has a sharp eye, and has established himself as a director to watch. He nails the feel of high school - the casual interactions, the puffed up egos, the clumsy expressions of teenage grief, the self-righteous, disconnected sloganeering of the teachers. It feels authentic, and that goes a long way.

As it stands, Afterschool feels like half of an idea, half of a good movie, and half of a film school project. At its best its completely unsettling, at its worst its dull. And somewhere underneath it's a film with an identity crisis in need of a sharper focus.