Much has been made this year about the large amount of great films by female filmmakers, especially those with shots at Oscar glory - Kathryn Bigelow's The Hurt Locker, Jane Campion's Bright Star, and Lone Scherfig's An Education just to name a few. An impressive achievement to be sure, but I've noticed a very obnoxious new trend with some female bloggers out there, somehow making this year's Oscar race all about gender. 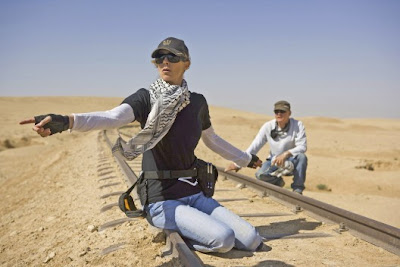 Kathryn Bigelow on the set of 'The Hurt Locker.'
I'm gay, and last year an openly gay man was nominated for Best Director for directing a film about the first openly gay man elected to public office, and an openly gay man won Best Original Screenplay. Did you hear me bellowing from the rooftops about victory for gay filmmakers? No.

I do not like it when "minority" groups use their minority status to define themselves. If all you are is gay, or female, or black, or any other number of groups, then you are doing a disservice to yourself and your group by painting yourself into a corner and becoming a walking caricature. I pulled for Adam Lambert to win American Idol not so he could become the first gay idol, but because I honestly thought he was the best. We should be celebrating these women's films, the fact that they are women should be incidental. To focus so completely on the gender of the filmmaker seems somehow regressive to me. 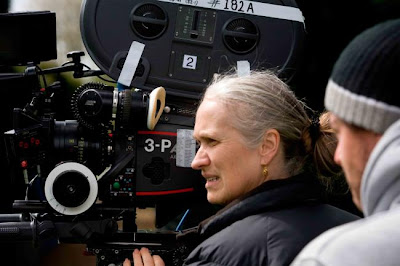 Jane Campion on the set of 'Bright Star.' Image courtesy of Apparition.
It's true that only three women have ever been nominated for Best Director, Campion among them. But it seems to me that looking at these women solely as great female directors rather than just great directors does them a grave disservice, and takes us back about 30 years. I'm sure someone somewhere will spin this into a chauvanistic argument, which it isn't. I'm a gay guy, I've seen this done with gay people and I know how it works. Most of my closest friends are women, and they agree with me on this. Stop making it about gender and start making it about filmmaking, which is why we're all here anyway, isn't it? Celebrate their films, celebrate their achievements, but please stop marginalizing what they have accomplished by focusing solely on one aspect of who they are.
Email Post

Daniel said…
I haven't really been up on the Oscar buzz at this early stage yet (I didn't even know An Education was directed by a woman), but I can see where you're coming from. Kind of like how that Denzel/Halle year was supposed to be some huge breakthrough for African-American actors. Yeah, where are they now?

It's a tough balance, to be sure, because I've always categorized the Best Director race, tongue-in-cheek, as the Best White Male Director race. I guess I'd like to read the excitement about female directors this year as excitement for a break from the norm as much as anything else. But maybe it's not, and you're on to something.
11:57 AM