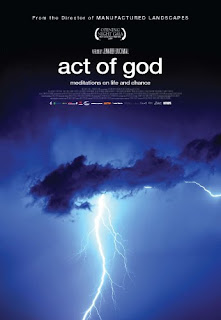 Since the beginning of history, mankind has always regarded lightning with a kind of reverent awe. Its timeless representation of the sheer power of Mother Nature has inspired theologians, artists, poets, thinkers, photographers, writers, and people of all walks of life for millennia. Even now that its origins are understood by science, few things can rival the awesome beauty and fearsome power of lightning.

In Act of God, the new documentary by Jennifer Baichwal (Manufactured Landscapes), lightning is examined on a more intimate and spiritual level, as we are taken through a series of deeply personal stories of people whose lives have been changed forever by lightning.

For the most part, they are survivors of a chance lightning strike, while others are family members of those who were not so lucky. Each has a unique story to tell, of a life forever changed in a flash of chance. 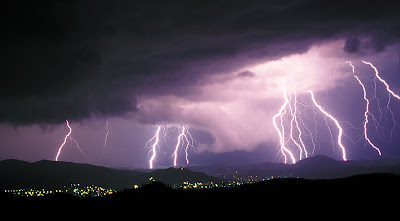 A scene from Act of God, a film by Jennifer Baichwal. A Zeitgeist Films Release. Photo: Alex Hermant
Or at least, that's what we're told to expect going in. In fact, Act of God is a scattershot, self important mess of metaphysical hooey and pseudo-New Age claptrap. Baichwal starts out with a solid premise, then completely flies off the rails. It starts when she tries to equate lightning with brainwaves, as scientists try to map guitarist Fred Frith's brain as he plays guitar, trying to unlock the mysteries of firing synapses and their relation to creativity. Before long she is taking stories of people who have been struck by lightning and stretching them out interminably, intercut with random time-lapse shots of electrical storms and jarring music.

It's not the stories that are the problem, it is the rambling, unfocused way in which they are told. They are dragged out in such a way that even the film's scant 76 minute running time seems like a marathon slog. Baichwal, an obviously talented filmmaker, inexplicably buries the stories beneath her fascination with images of lightning, which would be fine if she was making a nature doc, but the personal stories seem lost amid the chaos, leaving the viewer disoriented and frustrated. 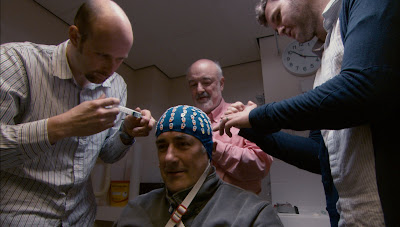 Fred Frith in his brother Chris Frith’s lab in London, getting electrodes attached. A scene from Act of God, a film by Jennifer Baichwal. A Zeitgeist Films Release.
Photo: Nick de Pencier
With such a majestic title and powerful subject, one would think Act of God could not go wrong. But sadly that is just not the case. It just doesn't work, as a documentary, as a meditation, as an abstract artwork, it just never seems to click. The material is there, but in a way that makes one wonder if it was scattered to the wind and reassembled by a tornado. The individual stories are strong, even moving, but the film that surrounds them does them no justice. It is a film that reaches for the heavens but only ends up with a handful of dirt.

And just when it has the chance to bring science into the equation, it balks. There's plenty of awe to go around, be it religious, scientific, or both, but Act of God remains stubbornly stuck in the world of abstract mysticism . It's fine to have a healthy dose of mystery and reverence at nature, but the film ultimately leads nowhere, which is a frustrating shame. It is a film lost and in need of direction, too busy fawning over its subject to make any sense.