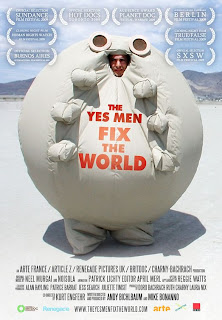 It's interesting seeing Andy Bichelbaum and Mike Bonnano's The Yes Men Fix the World so close to Michael Moore's Capitalism: A Love Story. Both films essentially tackle the same subject, albeit from very different angles.

It's kind of a Capitalism: A Love Story lite. Two regular joes (Bichelbaum and Bonnano) take on corporate America by, well, pretending to be one them. Mostly. Basically, Bichelbaum and Bonnano (who call themselves the Yes Men) are looking to stick it to the man any way possible, whether it is by posing as a Dow spokesman on the BBC and announcing that they will be spending $12 billion to clean up their disastrous chemical spill in Bhopal, India (causing Dow's stock to plummet), or posing as an oil company rep announcing that their next project would be to turn human cadavers into fuel. Each of their stunts is more outrageous than the next, each one tailor-made to call attention to an injustice, while confronting the corporation with a scenario so jaw dropping, that along with public outcry, will be impossible to ignore. 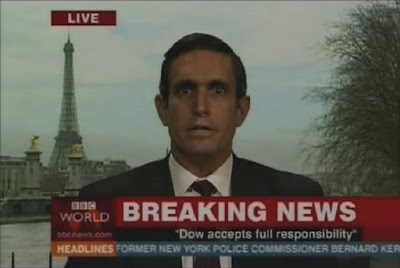 Jude Finisterra appearing on the BBC, on behalf of Dow Chemical, to take responsibility for the Bhopal disaster.
The problem with this is, of course, for corporate America, it is all too easy to ignore. While Bichelbaum and Bonnano's hearts are in the right place, I could never escape the feeling that their tactics were not only falling on deaf ears, but were completely self serving. Yes the free market is a bad thing and has hurt many many people, especially in places like Bhopal, India. And while the stunt they pulled should have raised awareness on Bhopal, instead it only made Dow angry, and the media turn on the Yes Men, saying that they had played a cruel hoax on the people of Bhopal, giving them false hope. To their credit, the Yes Men head to Bhopal to explain themselves, and find out that the victims of the tragedy and their families are grateful that they have brought awareness to their plight.

Probably their best stunt involves the "SurvivaBall," a ludicrous idea pitched to wealthy Halliburton investors involving a giant inflatable suit meant to sustain life in case of disaster. But instead of being immediately recognized as a satirical farce, the investors embrace the super-expensive joke as a way for those with means to outlast the rest. The joke was on them, but what did they learn? Nothing, I'm afraid. And therein lies my problem with The Yes Men Fix the World. 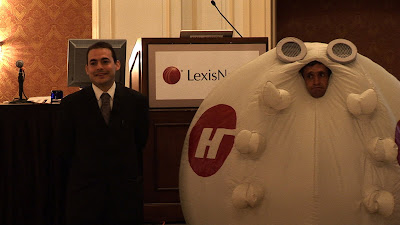 Halliburton presenting the SurvivaBall.
Naturally, they do not, in fact, fix the world. Bichelbaum and Bonnano are obviously earnest guys who really want to make a difference. But the media view them as troublemakers or glorified pranksters, and the companies they are satirizing are either completely missing the point or just don't care. Probably a mixture of both. Are they raising awareness? Somewhat, but I can't help but feel that they are more raising awareness of themselves rather than the injustices they are fighting. The problem is they are fighting serious injustices with what are essentially broad jokes that people need explained to them to understand. And most people aren't seeing the full story enough to get the punchline. The pranks are all that is getting them attention. The documentary is a bit of an attempt to change that, but it still feels a bit too "Yes Man-centric" rather than "issue-centric." Their antics are upstaging their own point. Being the loudest and most obnoxious person in the room does not exactly get your point across, it just makes people angry. Hearing investors talking about the acceptable risk of loss of human life versus profit margin is chilling and shocking, and I think the movie could have used more of that kind of expose quality.

That being said, you have to respect what these guys are trying to do. It takes real guts and real smarts to pull off some of the stunts these guys have pulled. It's a noble experiment, but one that, ultimately, seems to backfire more than it succeeds.