Paramount's Paranormal Activity became a bona fide phenomenon this weekend, finally topping the box office after five weeks in release. Thanks in part to a brilliantly orchestrated publicity campaign and strong word of mouth, the micro-budgeted horror flick surged past Saw VI, showing that the Saw series may finally be losing steam (despite the fact that Saw VII and VIII have already been greenlit). 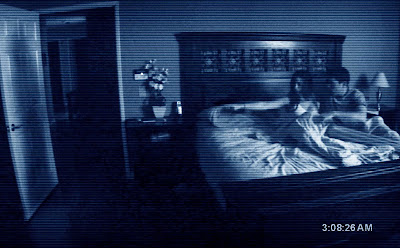 The marketers behind Paranormal Activity have been very shrewd in manufacturing a fan phenomenon, getting moviegoers to "Demand It" via Eventful.com, although clearly they already had plans to give the film a wide release. Still, you have to hand it to them, this may be one of the most successful grassroots marketing campaigns ever, turning this into the new Blair Witch Project.

I'm not really a fan of the film. The haunting scenes are effective but the interactions of the couple between hauntings are interminably dull and vapid. I always appreciate the less is more approach to horror (although the theatrical ending of the film takes away from that a bit), and Paranormal Activity gets it half right, much more so than the Saw films ever did, so I'm glad to see anything put Saw in its place. I just don't think Paranormal Activity is really all it's cracked up to be.
Email Post

Danny King said…
I really enjoyed this film a lot more that you did, but you are correct -- at the very least, it's a substantial step up from most of the bad horror franchises that keep putting out films today. It was great to see it win at the box office, especially over a Saw film that cares more about blood than anything else.
12:06 AM