Review: "Away We Go" 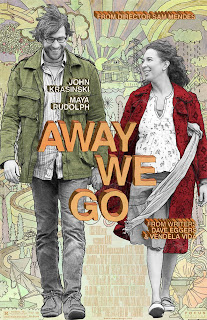 As cool as it has become for the internet hipsters to pile on Sam Mendes in recent years, I've always stuck by him. His stunning film debut, American Beauty, has become an Oscar whipping boy for revisionist bloggers who forget just how acclaimed it was in its year - yet it endures as a personal favorite of mine. While I'm no fan of Jarhead (a stylistic departure that did not fit his particular sensibilities), I quite enjoyed Road to Perdition and very nearly included his last film, Revolutionary Road, in my 2008 top ten list. And now we come to Away We Go, yet another stylistic stretch for the typically glossy prestige director, that is a strange and wholly different animal. Whereas Mendes' typical M.O. is the kind of high-end Oscar bait that studios kill for around the end of the year, Away We Go is a an excursion into the kind of American indie quirk that has become so popular (and overdone) over the last decade or so. It has it all - eccentric characters, melancholic accoustic indie music, tightly framed shots of the characters in awkwardly still positions - at first glance Away We Go is indie to the core. 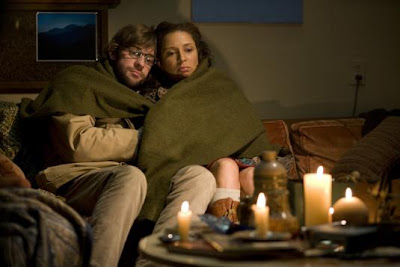 Except it's not. Not even close. It's faux-indie, a studio approximation of indie sensibility. With its big-name Hollywood director and pedigree, Away We Go isn't really fooling anyone. That isn't to say that the ingredients aren't there, but nothing about it feels spontaneous or natural, which is the real hallmark of American independent filmmaking. Starring John Krasinski and Maya Rudolph as a couple of thirtysomethings still struggling to find their place in the world as everyone they know moved on and grew up without them, until an unexpected pregnancy forces them to grow up, Away We Go traces their journey across the country as they look for a new place to call home. Of course, along the way, they meet all sorts of colorful characters - from Krasinski's obliviously self centered parents (Catherine O'Hara and Jeff Daniels, both clearly having a blast), to Rudolph's oldest friend (a delightfully nutty Allison Janney), to Krasinski's bizarre, new age guru "cousin" (Maggie Gyllenhaal), each one stranger and more wacky than the one before. And each one showing, in their own way, just what kind of parents they do not want to be. 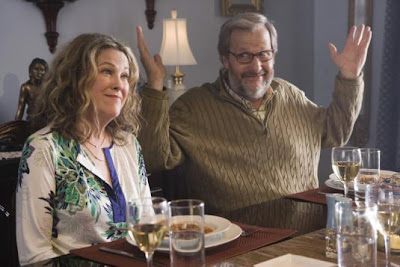 While each segment more or less succeeds on its own terms, none of them are really long enough to make much of an impact, and seem to exist in their own separate universe. I'm not sure whether to blame Mendes or the screenplay by Dave Eggers and Vandela Vida, whose dialogue is both sharp and witty. The problem is that these segments don't really seem to fit together, creating a disjointed and episodic structure that doesn't add up to a satisfying whole. While I enjoyed the character interactions and performances, as well as the fantastic soundtrack by Alexi Murdoch, the entire production just seems underwhelming. The blame doesn't rest on any one aspect, each one has just as many pros as cons. While Mendes is clearly out of his element here, he still delivers some beautiful moments. And the screenplay offers up quite a few intelligent zingers and moments of surreal humor, but Away We Go is never as much as the sum of its parts. It feels strangely hollow, never as profound as it obviously thinks it is, but still strangely likable in spite of itself. Each segment feels like its own short film (some admittedly more successful than others), but when you put them together they feel somehow diminished. A shame considering the enormous potential, but if you've seen the trailer, you've pretty much seen the highlight reel. GRADE - ★★½ (out of four) AWAY WE GO; Directed by Sam Mendes; Stars John Krasinski, Maya Rudolph, Catherine O'Hara, Jeff Daniels, Allison Janney, Maggie Gyllenhaal, Carmen Ejogo, Jim Gaffigan, Paul Schneider; Rated R for language and some sexual content.
Email Post
Labels: Sam Mendes

Charles Lyons said…
Alexi Murdoch did the soundtrack, not Alexi Jones, as you suggest here.
8:25 AM

Sam Juliano said…
Well, you can count me as with you on AMERICAN BEAUTY, which indeed has become the whipping boy of bloggers who seem to find it fashionable to thrash. But it remains one of it's year's bets films. I didn't see this film yet, oddly, but I see where you are coming from. I expected as much.
5:50 PM