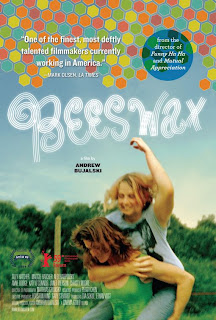 I've always appreciated films that take a "slice-of-life" look at life - dealing in naturalism and down to earth reality rather than forced, contrived plot points. Andrew Bujalski, director of Funny Ha Ha and Mutual Appreciation, is credited by many as the father of the mumblecore movement, an overblown pseud-genre that features mostly non-professional twentysomething actors improving their way through a basic planned scenario. Except Bujalski's films really don't subscribe to the basic tenets of mumblecore, and it is easy to see that his latest film, Beeswax, is a cut above anything put forth by the mumblecore genre. 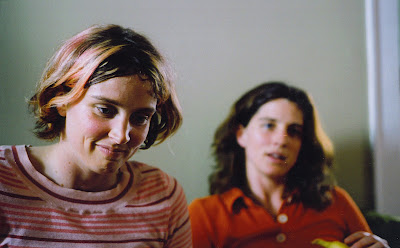 Jeannie (Tilly Hatcher), left, and Lauren (Maggie Hatcher), right, as seen in Andrew Bujalski’s “Beeswax.” Photo by Ethan Vogt. Courtesy of The Cinema Guild.
Jeannie is dealing with mounting tensions with the co-owner of the store, her estranged friend Amanda (Anne Dodge) , who is threatening legal action over some never-named mis-communications that took place while they were both managing the store, and is becoming more and more agitated. As she continues to sink into worry, she brings in her ex-boyfriend, Merrill (Alex Karpovsky), a law student, to help prepare for a possible lawsuit.

All the while, Lauren is juggling family responsibilities with advancing her career. But as each one becomes involved in their own petty squabble and problems, they all begin to see the importance of each other outweighs their own perceived problems, and that family is the glue - the beeswax - that binds them all together. 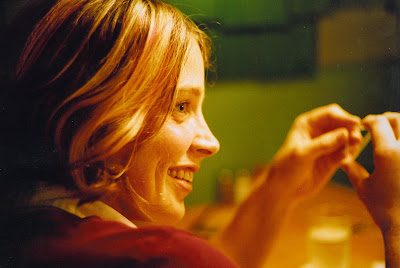 Jeannie (Tilly Hatcher) as seen in Andrew Bujalski’s “Beeswax.” Photo by Ethan Vogt. Courtesy of The Cinema Guild.
That is not to say that Beeswax is one of those films where everyone makes a discovery about themselves and end the movie in a great big hug because they all learn a lesson, which if you judged it solely by the its sunny advertising art, it exactly what it appears to be. But precious little is learned here, the characters end up very much as they begin, lost in a sea of stunted growth confusion, little people caught up in little problems of their own devising. That makes Beeswax a very hard film to like, because its characters are, quite frankly, annoying. But the film's construction is almost breathtakingly real. It almost feels as if Bujalski just came into these people's lives, set up a camera, and simply observed.

All this makes Beeswax a strange animal indeed. As a viewing experience it is both frustrating and, in some ways, uninteresting. But for a film to feel this real is both impressive and surprising. The performances all feel natural and lived in, and it is clear that they have existed long before the movie began, and will continue on much as they did before we came along. Bujalski brings us into their lives for a brief period, and pulls us out when our time is up very much as we entered it - no plot resolution, no real character arcs, nothing. It's unsatisfying as a whole, but you have to respect what it does. Beeswax may not be a particularly enjoyable film, but it's an easy film to respect.

Sam Juliano said…
Matthew, I am pretty much with you here. I enjoyed hearing the director conduct the Q and A session afterwards on Saturday night at the Film Forum, but the film left me cold.
1:38 PM