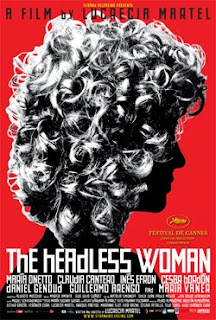 Calling Lucrecia Martel's The Headless Woman a difficult film is like calling Citizen Kane a pretty decent picture. It is a dense, methodical, intentionally disorienting journey into the mind of a woman who may be hallucinating, going crazy, or a murderer. The problem is that she doesn't know herself, and neither do we.

As Veronica, a middle aged woman who becomes distracted on a lonely road one night, and may or may not have run over something, Maria Onetto gives a stellar portrayal of total disorientation and gnawing inner fear. When she returns to that stretch of road the next day and finds nothing, she is at first relieved, until a young boy is discovered in a ditch. Suddenly the fear and the guilt take hold. Is the boy the thing she hit in the road that rainy night? Or was the boy's death a mere coincidence? Veronica descends into a state of shock, living in a walking state of sleep, as life continues around her she retreats into her guilt-ridden mind, gnawing herself into an almost catatonic state, paralyzed by the fear of the unknown and her own cruel imagination.

Martel structures the film in such a way as to never let the audience know anymore than Victoria does, and we are left to ponder the very questions that she does. In that regard, The Headless Woman is almost like an Edgar Allen Poe short story, delving very much into a haunting and compelling man vs. self drama. It would be a mistake, however, to think that this is in anyway some kind of thriller. Martel builds the paranoia in a very simple and mundane way, letting Veronica's blank stare and lost wandering turn into a slowly churning pit of inner turmoil. There isn't so much a story arc or plot, and Veronica as a character doesn't really change. But it's a deliberate plot to throw the audience off, we are every bit as lost and disoriented as she is, and it can often be unpleasant and downright hard to watch.

But what a feat! By the time the film is over (with its open-ended conclusion, refusing to let us off the hook with any kind of solid resolution), Martel has left the audience both breathless and frustrated. It's hard to tell whether The Headless Woman is a work of mysterious paranoia akin to Michael Antonioni's L'avventura, or just a work of maddening pretension. The answer, I think, lies somewhere in between. It is not a masterpiece on the level of L'avventura (although it may be even more maddeningly impenetrable, but it lacks that film's powerful atmosphere), nor is it a high-brow Punk'd stunt. It's an impressive study in form and a psychological character study, literally translating its protagonist's mental state into a cinematic language all its own.

In the press notes, Martel says of her inspiration for the film - "Last night I dreamt again. I was coming out of my Grandma’s house after a visit and, when looking for my car keys in my purse, I found a black hand. Dark skin. I realized I killed a black woman. The keys in my purse are not my car keys but the keys to an apartment where I am going and where I know the body is. I woke up crying a screaming. Who did the hand belong to? I guess the maid’s. Poor thing. And you never cry for the people you killed? Well, I hardly know them. This movie was created in the vapor of this conversation." I can think of no more apt description of this film than in that last sentence. The Headless Woman is a film made in a vapor, lost in the disorienting fog of one woman's soul-ravaging fear.

This chilling meditation on guilt and class warfare (a wealthy woman who may have run-over a poor young boy while her husband tries to cover any potential tracks is, if nothing else, a pointed political critique) is a remarkable example of film form as psychological indicator. And while its deliberately disorienting nature can be off-putting, the effects are hard to shake.