Lars von Trier's Antichrist (IFC, 10.23) doesn't open for another two months, but I feel the need to write down some thoughts to sort all this out in my head. Honestly, Antichrist is either a complete masterpiece, or a complete train wreck. The problem is, I don't know which it is. 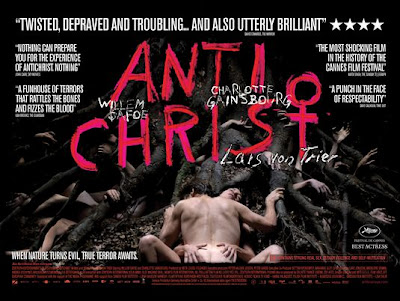 Von Trier is, in my opinion, one of the greatest living directors. His films Dancer in the Dark and Dogville are on my shortlist for film of the decade. But Antichrist is a whole different level. This dark, paranoid horror film about a couple mourning the death of their young son in a cabin in the woods amidst strange and troubling occurrences, was made as a therapeutic exercise for Von Trier as he was coming out of a deep depression.

It must have been a VERY deep depression, because Antichrist is as dark and depraved a film as they come, sparking outrage and talks of outright banning by otherwise levelheaded critics and journalists.

But that, of course, is exactly what Von Trier wants. He knows what he's doing. Antichrist isn't just a thumb of the nose to the disciples of "good taste," it is a full on flip of the middle finger and a giant FUCK YOU to anyone who dares to criticize him. From the first frame to the last, Von Trier dares you to hate it, just as much as he dares you to praise it, pushing the limits of tolerance for even the most jaded viewer. It's a grueling, punishing experience, described by Von Trier himself as "childish." It's provocative, to be sure, sadistic even. But it's a fascinating film to ponder and to study. I think, that after those who are disgusted by its extreme, sexualized violence have been weeded out, there is a great, intelligent discussion to be had about this film.

We just have to wait for the cries of outrage to die down first.