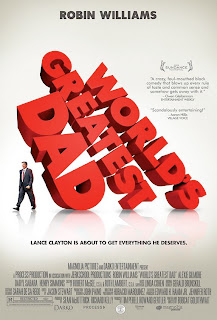 It must have been an absolute pain for the publicity team to market. And judging by the goofy lettering on the poster and the focus on straight comedy in the trailer, they missed the tone completely. Anyone going into this film expecting another goofy Robin Williams romp is either going to be severely disappointed or outraged. World's Greatest Dad is indeed a comedy, but one so pitch black that it is most definitely not suited to all tastes. And most of the film is so saturated with tragedy and emotion that it's often not a comedy at all, and those, oddly enough, are the film's strongest elements.

Robin Williams has proven himself to be a gifted dramatic actor in films such as Dead Poets Society, Good Will Hunting, and One Hour Photo (still his finest performance, in my opinion), and here he does some of the most finely tuned an subtle work of his career as Lance Clayton, a lonely high school teacher and failed writer whose hateful bully of a son, Kyle(Daryl Sabara, a long way away from Spy Kids territory), is the bane of the entire school's existence. 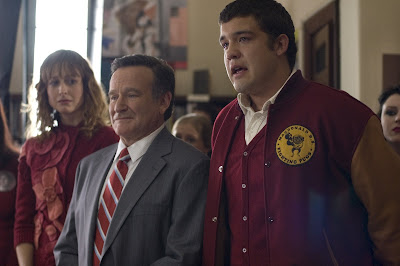 Alexie Gilmore, Robin Williams, and Zach Sanchez in WORLD’S GREATEST DAD, a Magnolia Pictures release. Photo courtesy of Magnolia Pictures.
Kyle is a loathsome worm of a human being, foul mouthed and perverted, obsessed with aberrant sexuality, hardcore pornography, and being a complete and total jerk to everyone he meets. This is a kid who takes pictures up the skirts of his dad's dates under the table with his cell phone camera and distributes them around. There is nothing, absolutely nothing, redeemable about him.

And then he dies.

Accidentally hanging himself while masturbating via autoerotic asphyxiation, Kyle dies in exactly the same way he lived his life - in the most vile and disgusting way possible. When Lance discovers him, he decides to preserve his son's dignity by disguising it as a suicide, and pens an eloquently anguished suicide note to complete the illusion. But soon the note goes public, and touches a deep chord in the hearts of the school's students. Suddenly, Kyle becomes a mythic figure, a beacon for the lost and disaffected. Students who hated him in life suddenly see him as a misunderstood lost soul with whom they can identify.

So naturally, Lance has to give them more. He fabricates a diary for Kyle, which begins to have a profound impact on the lives of the students. It moves them, inspires them, and for the first time, Lance's writing has touched hearts in ways he never thought possible. But no one knows it is him, and soon the lie begins to weigh on him. Is it right to continue the lie if it is having such a positive impact? Or would the truth devastate the school? And what is the cost for Lance? 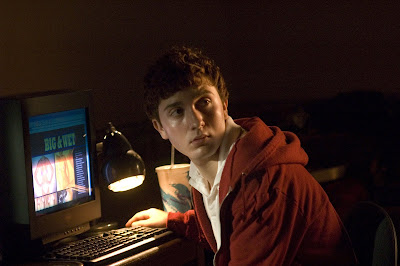 Daryl Sabara in WORLD’S GREATEST DAD, a Magnolia Pictures release. Photo courtesy of Magnolia Pictures.
They're all interesting questions, hence why the film's more dramatic, post-death section contain the film's most compelling moments. The dark comedy half, especially those scenes with Kyle, is much more awkward, despite a few funny moments. There's some pretty shocking stuff here, and Goldthwait walks a very fine line between comedy, tragedy, and just outright outlandishness. Often though, the film doesn't seem to know what it wants to be, and suffers from an extreme case of schizophrenia.

It has a real moral conundrum on its hands, with the potential to be a complex meditation on the nature of truth and its place when it could needlessly tear people apart. But the last act totally blows it. World's Greatest Dad flies off the rails in jaw-droppingly spectacular fashion, going from a mild curiosity to a train wreck out of nowhere, crashing and burning faster than the Hindenberg in a match factory. The ending is a true travesty, a wild, weird cop out finale to an otherwise interesting film; uneven and occasionally absurd, yes, but nothing to indicate the breathtaking level of weird that the ending represents. It seems like little more than a betrayal of the ideas at work here. Goldthwait abandons the moral and emotional questions raised by his film for outrageous gimmicks. It's a real shame too, because the set-up and the premise aren't altogether meritless, but the ultimate execution doesn't do it, or Williams, any justice.