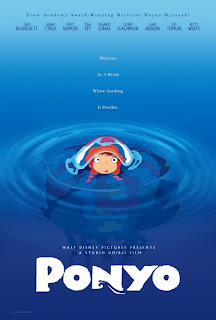 For anyone who says that traditional animation is dead, I point them no further than the films of Hayao Miyazaki, the Japanese master who is responsible for such works as Castle in the Sky, Princess Mononoke, and Spirited Away.

Miyazaki is one of the few remaining holdouts who stubbornly refuses to use any computer animation in his films, and we are all the better for it. Nothing against computer animation - Pixar has been making quality computer animated films for years. But there's just something appealing and more organic about hand drawn animation. Knowing that artists have spent months or even years drawing each and every frame of the film is somehow more impressive than knowing it was all composed of pixels and wire frames on a computer.

His latest film, Ponyo (or Ponyo on the Cliff by the Sea as it is known internationally, a title I much prefer to the simplified English moniker), opens with what is, quite simply one of the most visually stunning sequences in any film this year and some of Miyazaki's most breathtaking work to date. 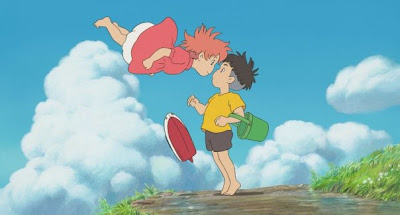 Unlike his last few films, Ponyo is aimed more at much younger children, with protagonists who are little more than toddlers, harkening back to some of his earlier films like My Neighbor Totoro. Inspired by the original story of the Little Mermaid, Ponyo centers around Sosuke, a little boy who finds a goldfish princess in the sea near his home on a cliff. Quickly becoming attached to her, he takes her home and names her Ponyo, and he soon discovers that she has the ability to talk, and that she longs to become human.

The daughter of a powerful wizard and a beautiful goddess, Ponyo uses their powers to begin to transform into a human girl, forming a firm and fasct friendship with Sosuke, who vows to help her, even though her absence from the sea begins to create great chaos as her parents use their powers to find her no matter the cost, sending out great waves and storms to bring her back. 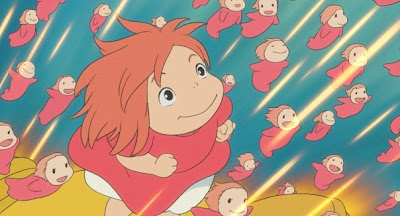 The similarities to the Little Mermaid are mostly superficial. Like most of Miyazaki's films, it is a wholly original and wondrous work of art. One could point out problems with the "love" story between the two protagonists and the binding love these two five year olds are so willing to dive into, but that would be to miss the inherent sweetness of the story. Miyazaki has always had a sharp eye for detail, and nevermore is that more on display than here. Watch the subtle ways in which Ponyo changes as the spell keeping her human - she slowly dissolves into an almost half-girl half-chicken creature, the lines in her face becoming less and less defined, less a human and more a blob with legs. It's a gradual transformation, almost unnoticeable at first, but that is a testament to the great subtlety of Miyazaki's craft. He, like so few animators working today, transports his audience into another world - one of fully realized characters and relationships, with real stories and believable flaws.

It's part of what makes Ponyo so charming. It is such a rare thing to see a children's film, let alone one geared for children this young, that actually takes the time to really try to see the world from their point of view. It treats children like actual human beings, worthy of being entertained in an intelligent and fully involving way. It may not be as emotionally rich as films like Castle in the Sky or Spirited Away, that's not what Ponyo is going for - it's just a good story, beautifully told, with great empathy and craftsmanship. It's hard not to hear the sweeping strains of Joe Hisaishi's joyous score, along with the gorgeous imagery, and not be caught up in Miyazaki's grand fantasy. It may go down as being a minor work in Miyazaki's esteemed canon, but if everyone else lived up to Miyzaki's minor works, then the world of animation would be a great place indeed.