There has been a lot of debate amongst film critics lately about the difference between depiction and endorsement, and where the line is drawn between glorifying evil characters and condemning them. Thanks to moral outrage from pearl clutching prudes aghast at the amorality of Hollywood, the Production Code once dictated that all characters who did bad deeds get their comeuppance in the end, and no film could portray bad people in such a way that could potentially make them look good. That's how gangster movies like 1933's The Public Enemy fell out of style. And even though the charismatic but brutal James Cagney got what was coming to him in the end, the film was barred from be re-released after the Production Code was enforced, and the heyday of the gangster picture was replaced with films that focused on cops and "G-Men" whose job was to catch the baddies those pre-code films had turned into heroes. 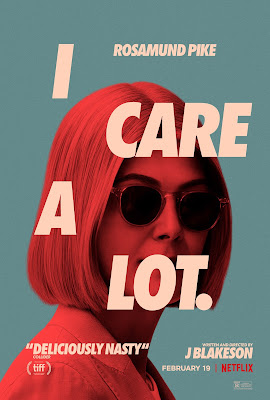 It's something we still wrestle with today - are movies merely morality plays in disguise? Or should films be allowed to put amoral people im the spotlight? It's a gray area, of course, and one that J Blakeson's I Care a Lot explores gleefully. But this is a reminder that just because someone is the protagonist of a piece does not make them the "good guy," and that depicting their evil doesn't mean that the film is endorsing their actions. In I Care a Lot, Rosamund Pike stars as Marla Grayson (a role for which she recently won a surprise Golden Globe for Best Actress)  who makes a living by railroading unsuspecting senior citizens and having herself appointed as their legal guardian, dumping them in nursing homes while she liquidates their estates for her own gain. She messes with the wrong person, however, when she Jennifer Peterson (Diane Wiest), who is not the sweet old lady she appears to be, and finds herself the target of Peterson's mob boss son, Roman (Peter Dinklage). Not intending to be beaten at her own game, Marla goes toe to toe with Roman, resulting in a truly wild battle of wits and ruthless cunning that threatens to destroy them both and everything they love.

Sometimes "deliciously evil" is just what we need out of a movie, and that is exactly what I Care a Lot delivers - a nasty shot in the arm of bad people doing bad things to each other that is enormously satisfying, where people whose success depends on the misfortune of others ultimately find their own undoing. Pike has created such an indelible, fully realized character, and Wiest does so much with her limited screen time that it reminds us of what a creative force she truly is. There's a certain amoral vim and verve to the proceedings that is at once horrifying and thrilling, allowing us to revel in the characters' evil while also recoiling from their monstrous deeds. I Care a Lot exists in a fascinating moral gray area that pulls no punches. Clearly we're not supposed to "like" these characters, but it's an undeniably fun ride watching what level of cruelty the characters escalate to next. Movies are not necessarily meant to reflect our morality back to us, sometimes they allow us to enter the world of wholly immoral characters and engage with them on their own terms. That's what makes I Care a Lot such a wildly entertaining film, because we're not really rooting for anyone, we can really focus on the journey. With a vivid color palate, Pike's ice cold demeanor, Wiest's mischievous twinkle, and Dinklage's unbridled rage, the audience is transported into a world where terrible people are terrible to each other, trapped in the zero sum game of human exploitation, where the only winners are those who decide to take the ride with them. This is one hell of a movie.