Set in Hong Kong and Shanghai during the Japanese occupation of China during WWII, Ang Lee's Lust, Caution is based on the 1979 novel of espionage and romance by Eileen Chang. Coming on the heels of Lee's Oscar success Brokeback Mountain, Lust, Caution marked a return to his home country of Taiwan for the filmmaker, but this time the response was much more muted than the major accolades that were showered upon his previous Taiwanese film, the Oscar-winning Crouching Tiger, Hidden Dragon. 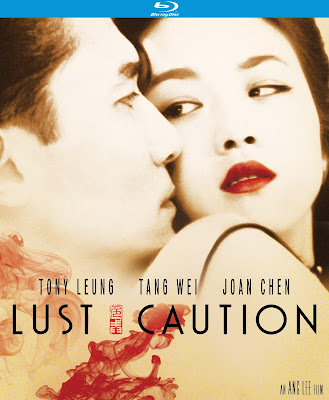 The film was ultimately disqualified by the Oscars from contending as Taiwan's official submission to the Best International Film category for not being "sufficiently Taiwanese," and failed to garner any other Oscar nominations outside of that category. Maybe it was the more restrictive NC-17 rating and its graphic sex scenes that kept it from gaining traction with the Academy, but revisiting it now nearly 14 years after its original release, it's clear that the film was robbed. There are so many artists who worked on Lust, Caution that were working at the very top of their game; from Rodrigo Prieto's rich cinematography, to the impeccable costume design by Lai Pan, to Alexandre Desplat's haunting score (perhaps his finest work to date) the film is a constant feast for the senses.

Yet it's the work of the principal cast that give the film its heart. Tang Wei (who beautifully navigates er character's journey from guilelessness to world-weariness) stars as Wong Chia Chi, a university student whose theatre troupe hatches a plot to assassinate local police chief, Mr. Yee (Tony Leung). Using Wong as bait in an extended undercover operation, her job is to seduce the married man and lure him into a trap. After their initial plot in Hong Kong fails and the students disperse, Wong Chia Chi encounters Mr. Yee once again in Shanghai. Enlisted by the resistance for a much more sophisticated undercover operation, Wong finds herself drawn into an intense affair with Mr. Yee, one that ranges from rape to unbridled passion, and the two begin to meet for regular rendezvous . Mr. Yee's caution soon gives way to lust, threatening to evolve their relationship in to something much deeper, putting the entire operation in jeopardy.

The sex scenes in Lust, Caution are often as sensual as they are disturbing, with Wong's relationship with Mr. Yee walking a tightrope between manipulation and genuine affection. But therein lies the underlying critique of fascism, as Wong's flirtation with authoritarianism in the form of Mr. Yee, a man both terrifying and alluring, ultimately leads to ruin. It's a delicate dance, and Lee navigates it beautifully, never blaming Wong for her choices as Mr. Yee has an undeniable appeal. Lee has consistently demonstrated a certain talent for exploring human relationships, and Lust, Caution is perhaps one of his thorniest, most complex works, the central relationship feeling at once exploitative and yet undeniably sexy, real and yet rife with unspoken danger. At last getting its rightful due with the gorgeous new Kino Lorber Blu-Ray, Lust, Caution is a film that feels ripe for re-discovery. In a world where fascism is once again appealing to so many, there are disturbing lessons to be learned here among the film's sensuous pleasures. It emerges now as one of the most accomplished, and consistently overlooked, films of Lee's illustrious career.