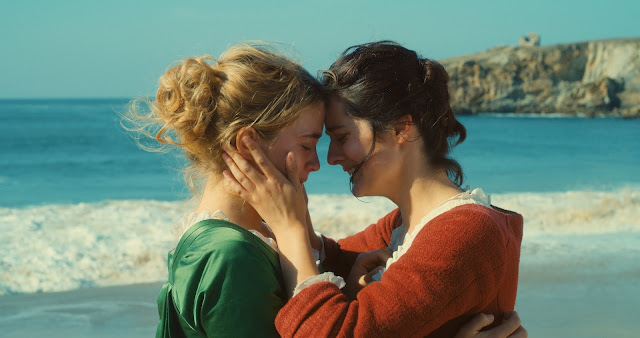 The surface of Céline Sciamma's captivating period romance, Portrait of a Lady on Fire, is somewhat deceptive. At first it appears to be a stiff and staid costume drama, a film of stiff upper lips and even stiffer fabrics. But slowly, almost imperceptibly, Sciamma peels back the layers to reveal something deeply passionate, even fiery, beneath its mannered veneer. 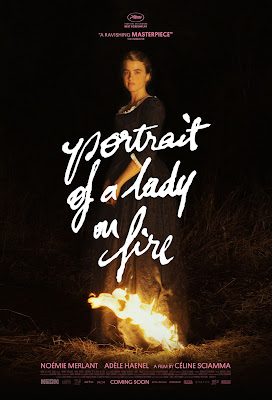 Set in the 18th century, Portrait of a Lady on Fire chronicles the lives of two women, one a painter (Noémie Merlant), the other a wealthy debutante (Adèle Haenel) engaged to be married to a man she has never met. The painter, Marianne, has been hired by Héloïse's mother to paint a portrait of Héloïse to send to her betrothed for approval. But Héloïse has other ideas, already having refused to sit for one artist in protest of her arranged marriage. Marianne is then tasked with painting Héloïse in secret, posing as a companion hired to keep her company and nothing more. But soon Marianne finds herself with much more than a companion; drawn to enigmatic and melancholy Héloïse, trapped in a societal system in which she does not want to participate, the artist slowly falls in love with her subject. As they defy both family and society, they must also face a ticking clock as Héloïse prepares to leave the island to be united with her new husband and begin her new life.

There is a sense of prim propriety in every frame - the emotion restrained as society would have dictated at the time. There is only music in two key scenes, resulting in a kind of hushed silence that hangs over the film, broken only by tentative conversations shared between the two protagonists. Sciamma finds the passion in stolen glances, verbal tete-a-tete between painter and muse, a cautious exploration of feelings left unsaid. Its inner world is unleashed when Marianne and Héloïse read the myth of Orpheus and Eurydice, the doomed love of the Greek heroes forming the backbone of the deep, poetic longing the two lovers share. It is through that lens that the film builds its emotional center, through a prism of longing and memory, regret and resignation, a dreamy recollection of a love affair long past slowly returning through the haze of time.

Sciamma has crafted a period piece that doesn't feel like a period piece; all the trappings are there - the costumes, the production design, but while she crafts the film like a Merchant-Ivory drama, it's the deep well of emotion coursing just beneath the surface that makes it so special. It's a film of restraint, of buried emotion, exploring the ways in which women were expected to speak and behave, and then boldly reading between the lines. It manages to be smoldering and sexy and deeply romantic more because of what the characters don't say and don't do than what they actually do. Portrait of a Lady on Fire takes repressed sexuality and emotion and turns it into the stuff of great romance, of star-crossed lovers seizing their moment of burning passion and holding onto the embers for the rest of their lives.

“Do all lovers feel as though they’re inventing something?” Héloïse asks Marianne during one scene in the film; and indeed, Sciamma seems to be inventing love anew, giving us something at once familiar, like the lingering memory of lovers long past, and vibrantly, thrillingly new, a love story that is wholly its own. She not only invites the painter to see herself through her subject's eyes, she invites us to reexamine life through the female gaze, and look at love anew. For a film of such delicate quietude to achieve such earth shattering power is something truly special indeed.