Originally slated for release in 2019, Craig Zobel's The Hunt came under fire on conservative media for its story of liberals kidnapping Trump supporters and hunting them for sport. The film eventually even caught the attention of President Trump himself, who issued a condemnation of the film from his Twitter account, causing a controversy that eventually led to the film being pulled from the schedule altogether. 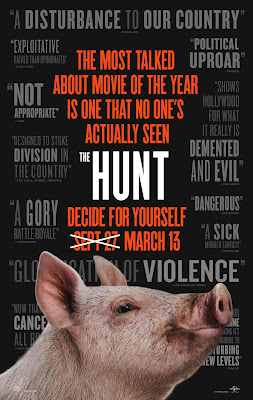 Now the film has finally found its way into theaters, using the controversy as its main marketing draw, and to the surprise of no one who actually watched the trailer rather than just listening to the president's unhinged rambling on social media, The Hunt is more of a satire of liberals than it is of conservatives, casting the "liberal elites" as the villains and the hunted "deplorables" as the heroes on the run. It's not hard to see that Zobel is going for some sort of "both sides" condemnation of our polarized electorate, casting the Trump supporters as wild-eyed conspiracy theorists whose worst fears have come true, and the wealthy liberals who hunt them as privileged elitists whose disdain for other side has lead them into an insular world of fake news just as bad as what they claim to be against.

The problem is that its satire is so broad, so blunt, and so misguided that absolutely nothing works. This is a film in which a villain, tasked with posing as an American ambassador, actually carries a box labeled "bribe money," which he uses to pay off foreign military agents. Subtle and clever this film is not. The idea is that an innocent text message exchanged among friends who run a powerful multinational corporation leak to the press, leading fringe right-wing conspiracy theorists to concoct a wild story about "liberal elites" hunting conservatives for sport at a manor house in Vermont. They call the theory "Manorgate," and it spreads like wildfire on conservative media. After losing their jobs in order for the company to save face, the liberals actually decide to hunt conservatives at a manor overseas for revenge, getting back at those who brought them down by making the conspiracy theory come to life.

This plan backfires spectacularly when they accidentally kidnap the wrong woman, mistaking Crystal (Betty Gilpin), a special ops veteran  who served in Afghanistan, for another woman of the same name who made disparaging remarks about ringleader, Athena (Hilary Swank) on Twitter. Lots of blood, guts, and gore are splattered across the screen as Crystal calmly wreaks vengeance on the people trying to kill her, determined to get back home at all costs. Gilpin turns in a strong performance; her laid back demeanor and Mississippi drawl seemingly at odds with the over-the-top decadence around her, but the film itself is one of the worst pieces of garbage to clog up multiplexes in recent memory. Zobel's brand of satire is messy and obvious, taking a kind of "everything but the kitchen sink" approach to see what lands, and very little, if anything, actually does.

The depiction of the liberals in the film is straight out of the Fox News "latte-sipping liberal" stereotype playbook, coming across as the kind of caricature that someone who thinks "did you just assume my gender" is the height of humor would come up with. The conservatives are likewise broadly drawn, shown as racist, gay-hating, gun-toting hicks that are everything the people trying to kill them think they are. For a film that seems to be pleading for understanding, its utter condescension toward everyone in the film consistently undercuts its message. No one wins here and everyone is terrible, and that kind of nihilism not only makes The Hunt an unpleasant watch, it also seems to suggest that everyone is just as terrible as the other side believes. It doesn't seem to actually understand where anyone in this film is coming from. One of the liberals actually refers to one of her partners as "comrade," as if a bunch of wealthy white liberals would actually co-opt the language of Marxism. This kind of utter lack of understanding of who it's depicting and why results in a film that has no idea what it's trying to say, but it's saying it loudly and constantly -  proudly ignorant, arrogantly self-assured, with nothing to back itself up; just like the people its attempting to lampoon. The Hunt is reprehensible trash, neither as edgy or as smart as it thinks it is, offering up little more than empty shock value with nothing the least but constructive or interesting to say. This one's not worth risking the spread of coronavirus - stay home and avoid this film like the plague.