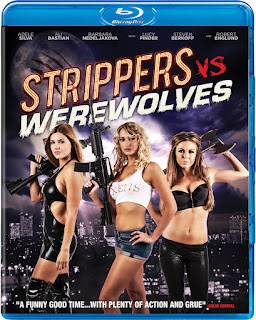 Strippers vs. Werewolves is pretty much everything you would expect it to be just by looking at the title.

Those who enjoy this sort of thing know exactly what they're in for going in, and its doubtful anyone looking for quality cinema would ever expect this to be anything of real value. That being said, there is certainly a place for this kind of knowing trash. Strippers vs. Werewolves is not an unintentional crap-fest. Neither is it the kind of ironically bad faux-grindhouse film that have become so popular in the last few years. It is somehow simultaneously just as bad as one would expect it to be, and yet better than one could have hoped for.

I wish it had the gumption to fully embrace the insanity of its premise, but it doesn't. It doesn't even really deliver on its salacious promise of blood and boobs, because while it has both, it doesn't have either in enough quantities to satisfy its core audience. 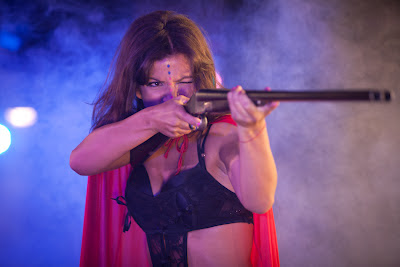 It almost seems a waste of space to bother with a plot synopsis, since the plot has already been summed up so succinctly by the film's title. What you see is what you get. After a stripper unknowingly kills a werewolf who gets a little too excited during a lapdance, she and her coworkers must fend off his bloodthirsty friends when they come back for revenge. That's it, really. No more, no less. And to be a goofy B-movie that's really all it needs. The problem is the film lacks bite. Unlike the grindhouse movies of yore, Strippers vs. Werewolves seems too timid to exploit the lurid possibilities inherent in its premise. A film like this should not be so strangely inoffensive. Even an extended cameo by Robert Englund as the Alpha of the werewolf clan fails to inject the film with the jolt of energy it so desperately needs. It's an exploitation film with nothing to exploit, a film that never delivers on its implied promise to titillate, shock, and amuse.

On the upside, its production values are much better than one would expect from a film like this. This is not some cheap, SyFy original movie (although the werewolf makeup effects are laughable at best). But that almost works to its detriment. I hesitate to accuse it of taking itself too seriously, because it clearly doesn't, but it's a drab, humorless affair nevertheless. Not silly enough to be an unintentional comedy and too downbeat to be a "so bad its good" midnight movie, Strippers vs. Werewolves never really justifies its reason for existing. It is too good to be the trash it wants to be and not nearly good enough to be anything of any real quality. Instead it seems caught in some sort of strange limbo, where something that should have been good exploitation fun turned out to be a bland, paint-by-numbers direct to DVD cash-grab.