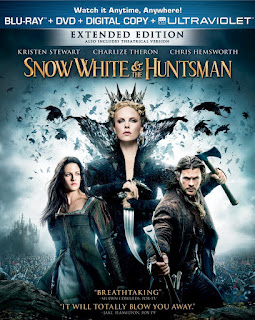 For the last few weeks, it has seemed that any discussion surrounding Universal's Snow White and the Huntsman was dominated by tabloid tittering over Kristen Stewart's much publicized affair with director Rupert Sanders.

While I still maintain that Stewart is the weakest link in an otherwise strong film, it's sad to see such fine work reduced to the subject of such meaningless gossip and its potential to effect the film's inevitable sequel.

In a summer typically dominated by sequels and franchise tentpoles, Snow White and the Huntsman offered a glimmer of originality, surprising many by becoming one of the summer's biggest hits without a built-in fanbase to support it. In the process it washed away any memory of Tarsem's bland take on the Snow White tale, Mirror, Mirror which was released only two months prior.

A much darker take on the classic fairy tale, Snow White and the Huntsman is first and foremost a visual feast, a fact made even more apparent by Universal's first rate blu-ray transfer. In my original review for The Dispatch I wrote:


It's a sumptuous visual feast, a refreshingly mature take on a story that has long been considered to be strictly children's territory. Sanders recaptures the story's dark roots and delivers a compelling and epic adventure that is a definite bright spot in a surprisingly dull summer movie season.

My opinion of the film hasn't changed, if anything it has grown. The "Extended Cut" on the blu-ray isn't noticeably different, the 12 minutes of new footage adding very little (and good luck noticing it). The extras are also pretty standard behind the scenes featurettes, but perhaps most fascinating is a mock up trailer that Sanders created in order to pitch the film to the studio. It's interesting to see how the film has evolved, but also how clearly some of the imagery he came up with so early on remains so intact. The supplements are unusually heavy on the filmmaking process rather than the usual shots of actors praising each other, and it's refreshing to see them focusing on how the film was made rather than empty platitudes. Fans of the film will certainly be pleased.

Just as the film itself was a bright spot in the summer movie going season, so too is the blu-ray release. While not quite Lord of the Rings level work, Snow White and the Huntsman is nevertheless one of the strongest and most entertaining fantasy epics to come along in quite sometime, and now one of the most beautiful films of 2012 has been given one of the most gorgeous blu-ray releases of the year.