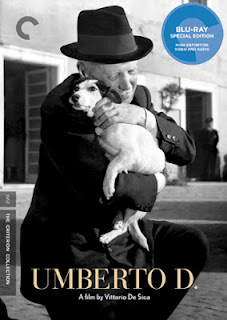 Ask any film enthusiast what was Vittorio De Sica's best film, and more often than not the answer you will most likely hear is Bicycle Thieves.

It's easy to see why. Bicycle Thieves is an undeniably great film and one of the pinnacles of Italian Neorealism. Yet despite its impressive credentials and sterling reputation, I have always preferred his later work, Umberto D.

I've often wondered why Umberto D. tends to get overlooked in all the effusive praise foe Bicycle Thieves. It was a flop in its time, but that is a fate that has befallen many a masterpiece. Jean Renoir's The Rules of the Game was critically and popularly scorned upon its original release, and is now routinely listed as one of the top ten greatest films of all time on any list worth its salt. So why Bicycle Thieves and not Umberto D? The answer, I think, is simple - the dog.

Yes, the dog - Umberto's faithful companion, Flike. Using dogs to tug at audience's heartstrings is probably one of the most shameless of cinematic conventions, and here the use of a dog at the center of a Neorealist film seems far more sentimental than the sparse austerity of Bicycle Thieves. But upon closer inspection it becomes clear that De Sica isn't manipulating us with the dog in Umberto D. anymore than he was manipulating us with the child in Bicycle Thieves. It is merely the audience's expectations, and the hoary cliches often associated with dogs, that give it that appearance. The problem is with audience perspective rather than the film itself. Looking back through the haze of the 60 years that have passed since its original release, the use of an old man and his dog to illustrate his point may seem like the height of audience manipulation, when in reality it is anything but.

Umberto, the story's central figure, is an elderly pensioner who is struggling to make the rent. We are first introduced to Umberto in a protest march of retirees demanding higher benefits, a march that proves fruitless as the police become involved. De Sica quickly sets up the social commentary of the film, delving into not only the plight of the elderly, but of the poor everywhere, and all those that society has left behind. Faced with losing his home to a nasty landlady who wants to evict him so she can expand her own room, Umberto has only two things left in the world to hold on to, the building's kind hearted young maid, Maria, whom he is caring for through an unexpected pregnancy, and his adoring dog, Flike. But as his situation becomes more and more grim, he must face the harsh reality that if he can't even provide for himself, that he will be unable to provide for Flike as well.

What follows are some of the most completely heartbreaking scenes in cinematic history. Umberto D. has a legitimate claim at being called the saddest film of all time, with the power to crack even the hardest of hearts. Here, De Sica's brand of Neorealist social commentary is at its most resonant, because there are few people on this earth whose hearts have not been touched by a dog at some point, or by that same measure, an older person like Umberto. De Sica knows his audience, and he hits us with something that is universally identifiable, our grandparents and our pets. When conditions are so harsh that even they, our most vulnerable citizens, are overlooked and suffering, then it strikes the audience in a much more immediate, personal way.

To that degree, De Sica did set out to manipulate the audience. At its core, Umberto D. is a guttural howl of outrage that someone like Umberto, who has worked for the state his entire life and always paid his debts, could be reduced to begging in the street, in what amounts to one of the film's most devastating scenes. But in true Neorealist fashion, De Sica never overplays his hand. He presents the world in all of its grim reality, paying inordinate amounts of attention to seemingly simple acts that make up every day life. His actors are all non-professionals, and that adds to the lived in, world weary feel of the film.

Umberto D. would be one of the last Neorealist films that De Sica would make before turning to frothier fare like Yesterday, Today, and Tomorrow and Marriage, Italian Style, but what a wrenching vision, what a painful, impassioned plea for overlooked masses. For me, it represents the best of what Neorealism was all about, and what it was capable of doing. It pulls at the heartstrings without ever having to try. This simple tale of an old man and his dog remains just as resonant and relevant today as it was 60 years ago, and Criterion's vibrant new blu-ray upgrade reminds us with clear-eyed frankness just how important and powerful a film it still is.