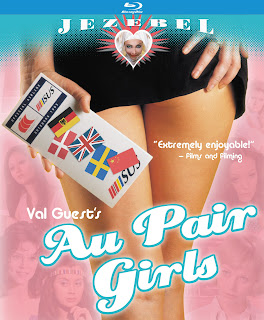 As social mores began to shift in the 1960s and 70s, so too did the cinematic landscape, as filmmakers became more relaxed in their depictions of nudity and sexuality.

European directors were perhaps more adventurous in that regard, which helped lead to the reputation of foreign films as being naughty alternatives to tamer American fare, although by the end of the 1960s the restrictive Production Code had faded away and the sexual revolution came to Hollywood.

Released in 1972, Au Pair Girls is a charmingly dated comedy about four French girls who come to Britain through an exchange program (known as "au pair") that will help them learn English by living with British families. Of course, the accented vixens have a much higher comfort level with displaying their bodies than their prim English hosts, and have a love of parading around naked and a willingness to bounce into bed with whoever casts them a second look. This naturally leads to a lot of tension between husbands and their wives, and some of the hosts' teenage boys who fall in love with their new au pair girls. And of course, hi-jinx ensue.

Au Pair Girls is undeniably goofy, and almost laughably dated, but that actually adds to its appeal. There's just something about its carefree 70s kitsch that is hard to resist. It's certainly a bit dippy, and Kino's blu-ray presentation is serviceable at best (there are no special features, and the image quality isn't anything to write home about), but there's just something inherently delightful about its winking innocence. Even in spite of its plentiful nudity, it seems oddly wholesome and quaint, a uniquely British trait that makes it more entertaining than it has any right to be. Fans of British comedy may also enjoy appearances by Are You Being Served alums Harold Bennett (Young Mr. Grace) as Lord Tryke and Trevor Bannister (Mr. Lucas) as an amorous photographer. It may be completely silly, but Au Pair Girls goes down surprisingly easy, avoiding becoming outright pornography through its use of broad slapstick and winking humor.