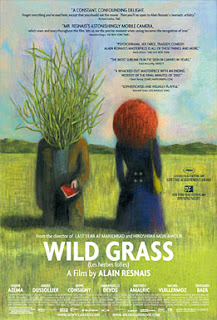 There is something magnificent about the obsession of octogenarian legend Alain Resnais' latest romantic trifle, Wild Grass. It all starts as a chance encounter, after fiery redhead Marguerite (Sabine Azéma) loses her wallet, only to have it turned into the police by older married man, Georges (André Dussollier), who becomes intrigued by the photo on her ID.Unsure of whether or not it is proper to contact her, Georges waffles around before finally working up the courage to introduce himself to her as the man who found her wallet. What follows is an awkward dance of gratitude and breached social conventions, as Georges' interest begins to turn to unhealthy obsession, and Marguerite's initial discomfort begins to turn to fascination. What on the surface appears to be a highly unusual, or even creepy, scenario becomes something much more for these two, an equally antagonistic and tender relationship that is something of a late in life jolt for both of them. For better or for worse, these two provide for each other an excitement they have long been missing.

Left to Right: Mathieu Amalric as Bernard de Bordeaux, André Dussollier as Georges Palet, and Michel Vuillermoz as Lucien d’Orange
© 2008, F Comme Film, Courtesy of Sony Pictures Classics
It's a surprisingly light and nimble comedy, given its subject matter. Resnais takes what in any real life situation would be frightening and turns it into something endlessly beguiling. Everything about Wild Grass is refreshing, and not just because it is a romantic comedy centered around an older couple. Resnais has the spark and the verve of a director half his age, and he directs with a light touch. It would be easy to call Wild Grass "frothy," but that does a disservice to the skill with which it is made. There is a darkness to it that adds to its unique personality. Resnais never dispenses with the obvious implications of the obsessive storyline, but he does so without allowing it to hamper the film's charms.

Of course the entire thing is one long awkward situation, but that is partly what makes it so charming. Love is an awkward thing anyway, and Resnais uses the inherent awkwardness of the plot to highlight love's tentative early stages. The timid advances, second guessing, and at times outrageous impulsiveness are all perfectly captured by Resnais' keen eye for character interactions. 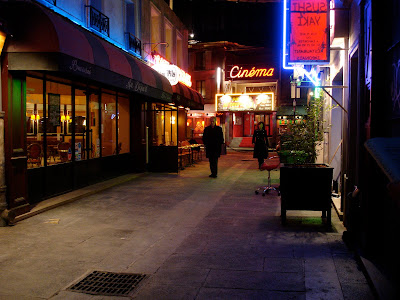 Left to Right: André Dussollier as Georges Palet and Sabine Azéma as Marguerite Muir Photo taken by Christophe Jeauffroy, © 2008, F Comme Film, Courtesy of Sony Pictures Classics
One could make the argument that it's all completely unbelievable, and to some degree that's true. But the important thing is that it feels emotionally true. Resnais hits the romantic bullseye in all its messy, irrational glory. It's all beautifully captured by Eric Gautier's gorgeous cinematography, highlighted by cheerful green hues, adding to the general warmhearted atmosphere. In fact the entire film is kind of like a warm blanket, a romantic comedy as only the French can do it, and more specifically, a New Wave legend like Resnais.

Wild Grass is a wonderfully unique film, a unique and compelling film that demands to be surrendered to. It's a feast for the senses, at once intoxicating and just uncomfortable enough to offer a bracing twist.

Aye Matthew, this is the Resnais I've always adored, and I had planned to see this over the weekend, but was occupied with a classic film festival. Your beautifully descriptive and enthusiastic review has certainly stregthened my resolve to see this later in the week.