Review: "South of the Border" 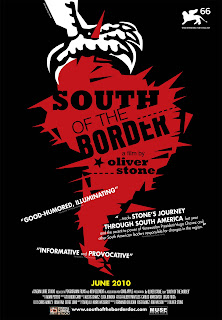 There are few international figures quite as polarizing and controversial as Venezuelan President Hugo Chavez. Often portrayed in the American media as an anti-American dictator and compared to Iranian President Mahmoud Ahmadinejad, Chavez was long a thorn in the side of former President Bush, and as such was long a favorite of liberal celebrities such as Sean Penn and Harry Belafonte, who made high profile visits to Venezuela during Bush's tenure.

It's enough to make one wonder just what the real story is, and that's what Oliver Stone set out to learn in his new documentary, South of the Border. You would be hard pressed to call it anything but one sided, it's obviously a very admiring portrait of Chavez and his Bolivarian Revolution that has spread throughout South America, but it's also a refreshing antidote to the equally one-sided picture the American public is treated to on a daily basis. And while the truth probably lies somewhere in between, South of the Border is still a compelling portrait of a fascinating and enigmatic world leader. 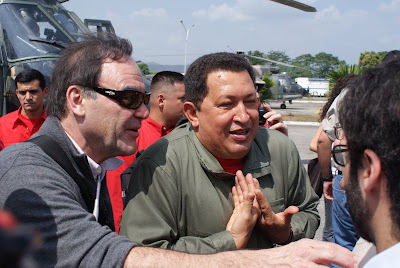 Director Oliver Stone and Venezuelan President Hugo Chávez greeted by the press. Photo by: Jose Ibanez
The film is a document of Stone's travels to South America in search of the real Chavez. What began as a simple trip to spend time with the Venezuelan President, became a journey across the entire continent of South America, examining the political climate that has led to the sharp turn to the left in many countries in the region. Stone interviews the leaders of Bolivia, Brazil, Argentina, Paraguay, Ecuador, and Cuba, who have all seen leftist presidents rise to power amid great political upheaval in the region, a phenomenon that Stone traces to a reaction against US interference and the economic tyranny of International Monetary Fund (IMF). According to these leaders, what is portrayed in the American media as anti-Americanism, is in fact the South American governments returning power to the people, and looking out for their own interests instead of the interests of the United States.

It will be hard for many Americans to understand the difference given the often inflated sense of nationalism that arises from our deeply polarized political climate, and the enduring prevalence of the idea of American exceptionalism, but it is a legitimate point. There is a bracing moment of clarity when Rafael Correa, the President of Ecuador, explains why he refused to allow the U.S. to build a military base in his country:

"We love the people of the United States very much. But obviously, the U.S. foreign policy is questionable. That's why when they want to pressure us to maintain their military base in our country, a foreign base that they don't pay anything for either, and they accuse us of being extremists because we don't want the base. If there's no problem having foreign military bases in a country, we set a very simple condition. We would keep the North American base in Manta, provided they let us put a military base in Miami. If there's no problem with foreign bases, then we should be able to have one over there."

Moments like these provide a refreshingly unfiltered perspective on how the United States is viewed by the outside world, and while Stone's perspective is anything but unfiltered, it's a breath of fresh air to hear perspectives from those who understand the difference between putting your own country's interests ahead of the most powerful country in the world, and hating America. 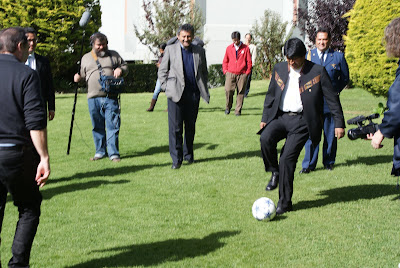 Oliver Stone and Bolivian President Evo Morales kick the soccer ball around. Photo by: Jose Ibanez
That's the real beauty of South of the Border - this isn't the kind of thing you see on the nightly news. Stone shows us quite a bit of the way Chavez is covered by the American media (mostly through clips from Fox News), and the dichotomy between the Chavez portrayed there and the Chavez portrayed in this film is staggering. Stone's Chavez is a charismatic man of the people, not the raging anti-American dictator that he is often described to be here. And while Stone's view of Chavez is admittedly one sided to the point of fawning, it's hard to not to see it as a welcome balance to the common American preconceptions about Chavez.

Under his democratically elected presidency, the Venezuelan government has taken over their oil industry, and doubled the size of the economy within six years, reducing poverty by half and extreme poverty by more than 70 percent. It is facts like this that are often missing from American coverage of Chavez, and Stone diligently sets out to dispel myths and present an alternative viewpoint. As both a personal portrait of a president, and as an examination of the geopolitical intricacies of a South America, South of the Border is a fascinating work. It may be a pretty basic overview of decades worth of political turmoil, but Stone takes us on an eye opening and thoroughly engaging tour through a world we only thought we knew. This is fearless, essential filmmaking.

SOUTH OF THE BORDER; Directed by Oliver Stone; Not Rated; Now playing in NYC, opens in LA July 2.
Email Post