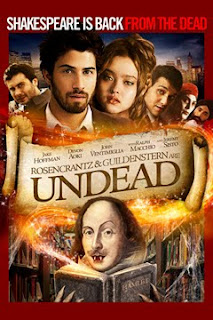 Rosencrantz & Guildenstern Are Undead may have one of the most insanely impressive plot synopses ever. The entire thing manages to combine a centuries old battle between good and evil, Shakespeare, vampires, and the Holy Grail into one film. And while on paper that seems like a surefire absurdist winner, in reality, it's a complete mess.

Hamlet, it seems, is a true story. Well...mostly. In the film, Julian (Jake Hoffman), a struggling, perpetually bored theatre director, who still lives at home with his dad, lands a job directing an off-Broadway production of Hamlet that reimagines the story to be about vampires. As it turns out, it is an autobiographical tale of Theo (John Ventimiglia), the mysterious vampire playing Horatio, who is actually the original Horatio, out on a quest to find and destroy Hamlet (Kris Lemche), who has been going around for hundreds of years curing vampires of their unholy affliction with the Holy Grail. 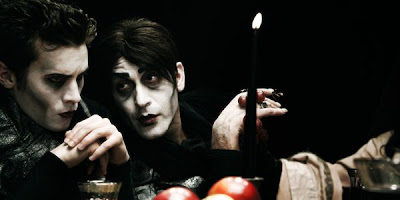 Finding himself caught in the middle of this Shakespearean war, as well as in the middle of a love triangle with his jilted ex-girlfriend, Anna (Devon Aoki) that he still loves, and her mobster boyfriend Bobby (Ralph Machio), Julian is forced to try and stop Horatio from stealing the Holy Grail and killing Hamlet, before he turns the entire audience into an army of the undead.

All the elements are here for some gleefully silly fun. Unfortunately, the film is strictly amateur hour. It feels like a half-baked student film, from the painfully unfunny script to the lackluster performances. Everything about Rosencrantz & Guildenstern Are Undead feels like the undercooked seed of a much better idea. This isn't a film, it's an 80 minute concept that tries way too hard to be quirky and funny. With such an original idea, chock full of potential, it's shocking that it all went so horribly, horribly wrong. 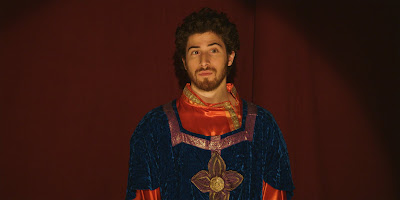 Each line, each shot, each element seems horribly miscalculated, as if someone involved took a list of everything about it that could have been done right, and then did the exact opposite. Rarely have I seen so much potential amount to so little. Even the actors seem bored, sleepwalking through stereotypically quirky performances that seem like everyone watched too many Michael Cera movies for character research, while suffering under incessant, esoteric theatre in-jokes that all fall flat on their faces.

There's just nothing here worth recommending. It's an awesome concept, but it's horribly executed. It's a good idea in search of a good film that comes up completely empty handed.

Imola said…
Pity, though, the material to start from was anything but poor...
8:46 PM