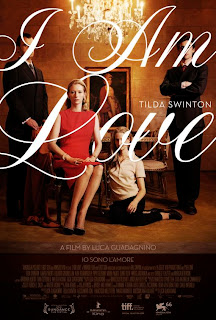 Many comparisons have been made of Luca Guadagnino's I Am Love to the work of Luchino Visconti, and most specifically his crowning achievement, The Leopard. Aesthetically speaking, it's a fair comparison. Guadagnino's vision is sprawling and Francesca Balestra Di Mottola's production design is appropriately sumptuous, not to mention Yorick Le Saux's lush cinematography. But the major difference between Visconti and I Am Love is that I Am Love is more focused on surface beauty and less on emotional resonance. Visconti's works were sprawling in scope as well as emotional depth. The impressive beauty of his films only helped to enhance the feelings and troubles of the characters who almost seemed dwarfed by their surroundings, lost in a sea of inner turmoil hidden beneath the opulent surface. In the case of I Am Love, the surface is undeniably gorgeous, but something seems missing. It lacks the richness of Visconti, and while that is a hugely unfair stick to measure it by, it never seems to live up to its full potential. 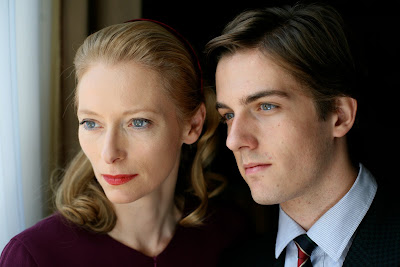 Tilda Swinton and Mattia Zaccaro in I AM LOVE, a Magnolia Pictures release. Photo courtesy of Magnolia Pictures.
Tilda Swinton is luminous as always in her role as Emma Recchi, the matriarch of a wealthy Italian family whose husband, Tancredi (Pippo Delbono) has just inherited the family's lucrative textile business along with his son, Edoardo Jr (Flavio Parenti). Everything about their life seems to be idyllic - they live in a beautiful mansion, they run a successful business, and they seem to have the perfect marriage. But then Antonio (Edoardo Gabbriellini), a friendly rival of Edoardo's shows up at their door to deliver a gift, and their lives change forever. As Emma's children go their separate ways in life, she begins to feel more and more on the sidelines, watching life go by without her while she remains the faithful wife and mother. Antonio begins to show up in her life more and more, and soon she cannot resist his mysterious allure. The two begin a passionate affair, but it becomes readily apparent that she must choose between love and her family, as the affair threatens to tear the family, and their empire, apart. 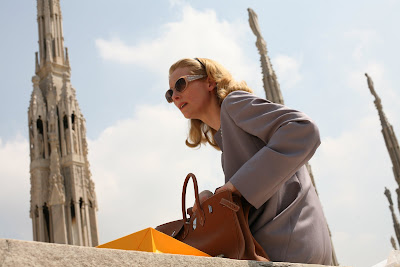 Tilda Swinton in I AM LOVE, a Magnolia Pictures release. Photo courtesy of Magnolia Pictures.
It's a surprisingly typical "unsatisfied housewife" scenario, but set against such a magnificent backdrop, it has every opportunity to transcend its well worn Sirk-by-way-of-Visconti path. Sadly, it never quite does, and culminates in a deeply unsatisfying conclusion that is completely dramatically unearned. While much is left unspoken, it often seems to leave avenues unexplored as well, never rising up to become anything more than a superbly acted, beautifully shot soap opera. And while it is an undeniably entertaining and elegant soap opera, it is a soap opera nonetheless. There are plenty of elements to love here, and even more to respect and admire, but sadly they never add up to a satisfying whole. Tilda Swinton is a magnificent center, but the film never explores her character and her situation in the detail it seems to require. It is in many ways a mood piece, but her character remains frustratingly distant, and her motivations spotty at best. Her decisions never seem dramatically justified, or for that matter particularly believable. Guadagnino cuts dramatic and emotional corners at every turn, leaving the film without a clear sense of identity. All the pieces for greatness are in place here, if only Guadagnino had connected the dots. Instead, I Am Love is a sweeping museum piece, incredible to behold and yet doggedly distant, much like the regal matriarch at its center. GRADE - ★★½ (out of four) I AM LOVE; Directed by Luca Guadagnino; Stars Tilda Swinton, Flavio Parenti, Edoardo Gabbriellini, Alba Rohrwacher, Pippo Delbono; Rated R for sexuality and nudity; In Italian w/English subtitles; Opens tomorrow, June 18, in New York and Los Angeles, expands June 25.
Email Post
Labels: Luca Guadagnino Tilda Swinton