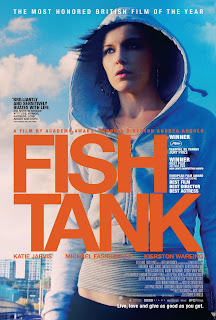 Lone Scherfig's An Education, a coming of age drama about a sheltered 16 year old girl's tempestuous affair with a wealthy, worldly older man, has gotten quite a bit of critical acclaim and awards buzz in the past few months. Yet despite all the effusive praise, I found it too buttoned down, too calculated, too safe. It is a well crafted film, but I never felt it really took the chances it needed to transcend its immaculately produced period trappings.

Enter Andrea Arnold's Fish Tank, a gritty, hard hitting British drama that is everything An Education isn't. Its themes are similar; a 15 year old girl's life is suddenly turned upside down by the arrival of her mother's charismatic new boyfriend. But unlike An Education, Fish Tank takes chances. Its protagonist, Mia (Katie Jarvis, in a revelatory performance), leads a hard scrabble existence far from the charmed life of An Education's upper middle class suburbs. Her mother is a drunken floozy, her little sister a foul mouthed brat, and her dirty little apartment is sandwiched into a sardine-like high rise complex on the rough side of town. Mia spends her days roaming the street looking for trouble, whether its breaking some mouthy girl's nose, or trying to set loose a chained horse she begins to feel a kinship with, Mia is loud, confrontational, and downright rude. 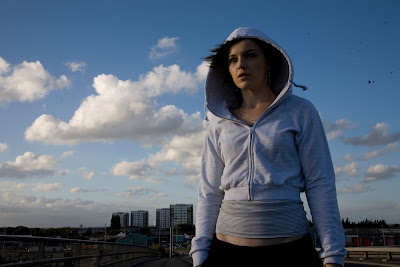 But the rough, street-wise veneer hides a desire for something more, a longing to break out and become a dancer. Cliche? Perhaps. Arnold ultimately has more on her mind than a rags to riches, girl from the ghetto makes good story of cheap inspiration. Fish Tank is a character-driven film, and Mia's dream to become a dancer is not the thread that holds it together. It is the journey of a lost and confused teenager, still trying to discover who she is while navigating the tricky waters of life in an unforgiving world.

Then something begins to change in Mia when her mother brings home a new boyfriend named Connor (Michael Fassbender, quickly becoming one of my favorite actors to watch). Connor is easy going, likable, something very foreign in Mia's run down world. And while she at first greets him with trepidation and disdain, his encouragement of her dance dream weakens her defenses. He provides her with music, and a camera to tape an audition piece. Slowly but surely, Mia lets down her guard to let the mysterious stranger in. 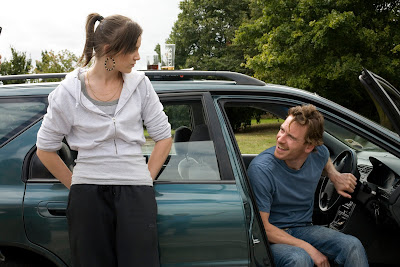 Katie Jarvis as Mia and Michael Fassbender as Connor in FISH TANK directed by Andrea Arnold. Photo credit: Holly Horner. An IFC Films release.
Where this is all going isn't particularly hard to guess, but Arnold consistently surprises and shocks, even while traversing thematically familiar territory. The first third of the film is an exercise in pure ugliness, a portrait of Mia's world that is both engrossing and repulsive. But Arnold draws us in, investing the audience in Mia's plight. 17 year old Jarvis, who did not have any acting experience before being cast in the film, gives a remarkably layered performance, showing us the vulnerable little girl beneath the hardened, street-smart exterior. She is the heart and soul of Fish Tank, a girl trapped in a glass bubble unable to escape. But when an escape route finally presents itself (beautifully symbolized in the film's quietly powerful final shot), it doesn't come in the form that she, or the audience, suspects.

Under Arnold's assured direction, Fish Tank comes to life with a thrilling verve. It's always vibrantly alive, teeming with energy and a raw, compelling power. She pulls no punches, taking consistently bold chances and daring choices that ultimately pay off. This is a rare coming of age drama with the courage avoid the genre's typically maudlin pratfalls, and emerges as an electrifying and triumphant piece of cinema.

Danny King said…
Your first paragraph pretty much sums up my mediocre feeling on "An Education". I'm very much looking forward to "Fish Tank" for those same reasons as well. It definitely seems grittier and less-polished, something that I welcome. I know Fassbender will be great, but I'm also intrigued to see Jarvis' performance.
1:17 AM