Best Foreign Language Film has always been one of the most mystifying categories at the Oscars. Most viewers have never seen, let alone heard of, any of the nominees, most of which have yet to be released in the United States, and the category routinely leaves out some of the most acclaimed foreign films of the year. 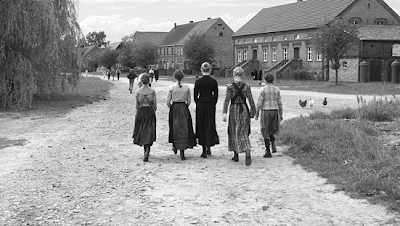 Germany's "The White Ribbon"
For instance, acclaimed films from this past year like France's Summer Hours and Chile's The Maid were not submitted by their respective countries, and are therefore ineligible for a nomination. In the past several years, widely praised films (and presumed front runners) like Cannes Palme D'Or winner 4 Months, 3 Weeks, and 2 Days were snubbed from the shortlist entirely, causing major overhauls in how the films are chosen.

This year, nine films were shortlisted, five of which will become nominees when the nominations are announced this Tuesday, and only one of which has even been released in the US as of this writing (that would be Germany's The White Ribbon), while only two more have US distributors. I have seen seven of the shortlisted films, and they are a mixed bag. Two things are for certain, The White Ribbon and France's A Prophet will be nominated, and will be duking it out for the win, as they have been all season. The other three nominees are much more of a toss-up. While I have not yet seen Israel's Ajami, it has garnered enough to positive buzz to assure itself a place in the final five.

The Netherlands' "Winter in Wartime"
So who fills out the last two spots? My money is on The Netherlands' Winter in Wartime, a rather conventional but beautifully shot coming of age tale set against the backdrop of WWII. It's Academy bait up one side and down the other. That leaves one vacant spot. I haven't seen Kazakhstan's Kelin, but from what I do know about it (it is entirely dialogue free), I wonder how Academy friendly it will be. Peru's The Milk of Sorrow is an odd little film about a woman who, as a child, put a potato in her vagina to keep from being raped, which causes problems for her after the death of her mother. It's well crafted but underdeveloped, and I can't really see the Academy going for it. Ditto Australia's Samson & Delilah, whose wordless romance between a gas huffing Aboriginal boy and a lonely girl on the run, is more off-putting and bizarre than engaging. They may, however, go for Argentina's slick crime procedural, El Secreto de sus Ojos, whose director, Juan José Campanella, was previously nominated in this category in 2001 for Son of the Bride. The film didn't do much for me, it felt like it belonged on television, with occasional efforts to make it feel cinematic that just don't work. It's a possibility, but it just doesn't feel right. 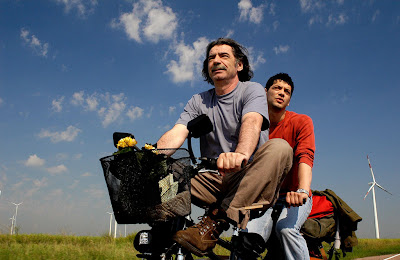 Bulgaria's "The World is Big and Salvation Lurks Around the Corner"
That leaves us with Bulgaria's The World is Big and Salvation Lurks Around the Corner, and here, of all the films in this category, is where my heart lies. My head may belong to The White Ribbon (which deserves to win), but by heart belongs to Stephan Komandarev's wonderful tale of a man who is stricken with amnesia in a car wreck that kills both his parents, and strikes off across Europe with his grandfather to return home, collect his memories and rediscover his identity. It's a warm-hearted, nostalgic tearjerker in the tradition of Giuseppe Tornatore and Cinema Paradiso, that comes by its emotions without being false or manipulative. This is the kind of thing Miramax would have been all over in the 90s, and has the emotional pedigree to really capture voters hearts and get the "made them cry" vote the way Departures did last year. The problem is, The World is Big is a much better film than Departures, and I would hate to see it have the stigma attached to it of Oscar spoiler. I would love to see it get nominated and get the attention it deserves so it might get a US release, but this award rightfully belongs in the hands of The White Ribbon.

So when it comes down to it, I think the nominations will look something like this:
We'll find out for sure on Tuesday morning. Here they are in order of my personal preference:
My fingers are crossed. I'm actually kind of interested to see how this turns out.
Email Post

Anonymous said…
I saw The White Ribbon and I was very disappointed, I knew it is the favorite movie for the Best Foreign Movie Award so my expectations were pretty high. I found that this movie does not have an interesting history, very much it tells the history of a small town and its problems which relate to any society problems. The movie is made in black and white which makes it harder to follow and enjoy. It is too dark at times. The most convincing actors of the movie where the children which were able to portrait the feelings of kids who would go thorough their situation. The movie develops before the first world war and the surroundings cleverly reflect that. However, the end does not help the history because it is not clear what happened at that point in time or during the movie.
It is only clear that the crimes would go unresolved and they could easily happen again. One big flaw of the movie is that it is too narrative. It is definitely not a blockbuster!
11:34 PM

Anonymous said…
The Prophet is a good gangster movie, it has all the ingredients for a good night in: violence, delicuency, intolerance, etc. However, the history has been told too many times by the movie industry so it would have to be as good as the awarded movies of its kind to be able to win the Best Foreign Movie Award this year. This would put it against: Scarface, American Gangster, Al Capone, etc. Not quiet there I guess.
11:34 PM