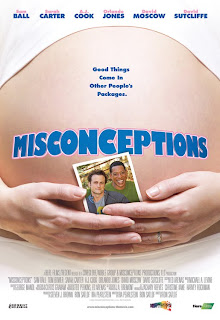 Going into Misconceptions, I fully expected it to be a quickie, low budget, gay themed comedy that painted in broad strokes with cartoonish, caricatured characters; the kind of cheap niche exploitation film churned out for a quick buck that has come to be expected from this genre.

But, as its title suggested, I had a woeful misconception of what this movie would be. Misconceptions is none of the things I expected to be, and I was pleasantly surprised to discover that it is in fact a sweet, completely endearing and surprisingly moving comedy with great crossover potential.

It is the story of a conservative Christian woman named Miranda (A.J. Cook), who five years after the death of her young child at the hands of a rare disease, has a vision from God telling her to become a surrogate mother to a gay couple looking to start a family. The gay couple in question is Terry and Sandy Price-Owens (Orlando Jones and David Moscow), a choreographer/designer from Boston and a doctor who specializes in researching the disease that killed Miranda's son.

Orlando Jones, Sarah Carter, A.J. Cook looking at sonograms.
Photo courtesy of Regent Releasing/Here Films.
Things get complicated when Terry arrives in Georgia to micromanage Miranda's pregnancy before she has informed her husband, Parker (David Sutcliffe), of the situation. Parker is an adamant anti-gay activist, in the midst of a gay marriage protest campaign with their church. Terry's arrival not only scandalizes the community, but puts a rift between Miranda and Parker, as well as between himself and Sandy, who begins to feel the long distance strain.

Misconceptions skillfully avoids the pratfalls of many socially conscious comedies, never coming off as preachy or heavy handed. It admirably treats both sides as human beings, rather than broad caricatures, never once feeling like it is condescending to its characters or the audience. It is a good natured film, warm hearted, funny, and surprisingly quite moving, using comedy as an emotional and even spiritual journey rather than for meaningless laughs.

Orlando Jones, A.J. Cook, David Moscow.
Photo courtesy of Regent Releasing/Here Films.
The part where it missteps is in its rush to meet its ends, it often fails to develop its characters reasoning. Some people are a little too quick to change and abandoned their prejudices, often given no real reason to do so. The film has a tendency to take the easy way out to keep the tone on a more pleasant keel, which is a shame given the strength of its other parts. It misses the chance to show how problems are solved, and instead just solves them in an effort to celebrate togetherness while sacrificing meaning. But ultimately that doesn't necessarily make the film a less satisfying experience. Orlando Jones, for his part, has never been better, giving the film's best performance and showing off some dramatic range.

Misconceptions is really a surprising film in many ways. It is sweet, funny, and entertaining without being maudlin or inane (and has a great gospel music soundtrack), allowing the comedy to spring naturally from the situation rather than forcing it (at least after the opening scene) and making it feel false. I was reminded in some ways of Adrienne Shelley's Waitress, and while Misconceptions isn't quite on that level, their tones are similar, and they left me with a similar feeling. This is a film that deserves to be viewed as more than just a "gay" niche film, and break out to a wider audience. It has the strength, and the quality, to make an impression with a very diverse audience.