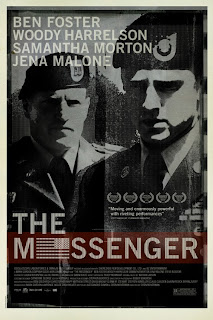 Films dealing with the Iraq war have not exactly had a solid track record with critics or audiences. While The Hurt Locker was the first Iraq combat film to make headway with either group earlier this year, garnering quite a bit of Oscar heat in the process, those films that dealt with the aftermath of the war, the soldiers on the home front, have been largely neglected.

I'm thinking mainly of Paul Haggis' In the Valley of Elah, which I think was severely underrated. But no film really has taken a hard, unbiased look at soldiers dealing with the aftermath of the war than Oren Moverman's impressive feature debut, The Messenger.

The premise alone is rife with dramatic potential, but also potential for manipulative exploitation. But Moverman walks a fine line, never pushing the subject too far or manipulating the audience with unnecessary sentimentality The story, and its subject, speaks for itself. 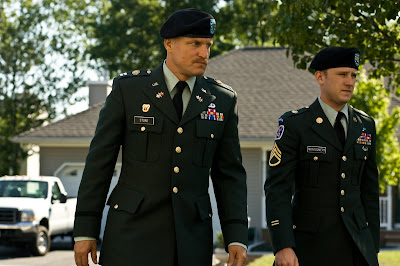 Ben Foster stars as Staff Sergeant Will Montgomery, a decorated war hero just weeks away from ending his tour of duty and being discharged. After being injured trying to rescue some of his comrades in Iraq, with a persistant eye condition that prevents him from returning, he is assigned to the Army's Casualty Notification service, in charge of informing the next of kin that their loved one has been killed in action. His commanding officer is the tough-as-nails Captain Tony Stone (Woody Harrelson), a man still bitter about not having seen any combat during Desert Storm, but completely devoted to his duty with the CNS. It's a job time has hardened him to, and the youthful idealism of Montgomery, more interested in the human factor than the stiff regulations, clashes with Stone's more old school mentality.

Montgomery finds it increasingly hard to watch the heartbreaking reactions of devastasted parents and spouses of fallen soldiers. His instincts to lend a comforting hand grow stronger with each encounter. It all comes to a head when he meets Olivia Pitterson (Samantha Morton), while notifying her that her husband has been killed. He finds himself drawn to her, to her stoic sadness, her determined spirit in the face of grief. And against all protocols and regulations, begins spending time with her and her young son on a regular basis. 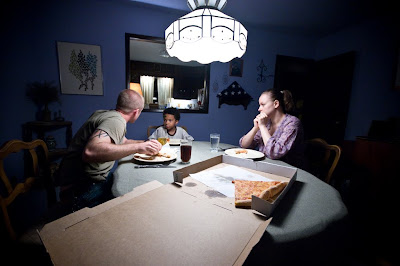 What outwardly seems to be completely inappropriate is actually a very tender and unusual relationship. One that extends beyond romance or anything unseemly, and into something very beautiful and nurturing. The entire film has a kind of delicate balance, between honor, duty, and humanity. It exists in a kind of in between place where grief and hope coexist. The scenes of the officers delivering notification are painful to watch, but they make up The Messenger's deeply affecting heart. No other film in recent memory has portrayed with such clear-eyed honesty the effects of the war on those who are left behind, as well as the men who were there. And it does so with astonishing grace and a refreshing lack of agenda. It would be hard to call it either pro-war or anti-war. Its themes are far bigger, and less black and white, than that.

This is also Ben Foster's finest hour. He has been establishing himself as a character actor to watch in films such as 3:10 to Yuma, but here he displays an astonishing emotional range and control. All the actors do. Harrelson has honestly never been better, and Morton makes the most of a rather small and limited part. The screenplay by Moverman and Alessandro Camon is searing and honest, hitting all the right notes with a stoic grace. Not only is it an impressive debut for Moverman, but one of the most powerful and humane war dramas to spring from this current conflict. While The Hurt Locker may be getting all the attention this year, The Messenger is an excellent film that should not get lost in the crowd.