In my earlier, formative days of being a film buff, my only immediate source of film news or reviews was Entertainment Weekly. I eagerly awaited each issue, got excited every time a new Fall Movie Preview or Oscar Preview issue was released, and pretty much lapped up every piece of information from it I could get. 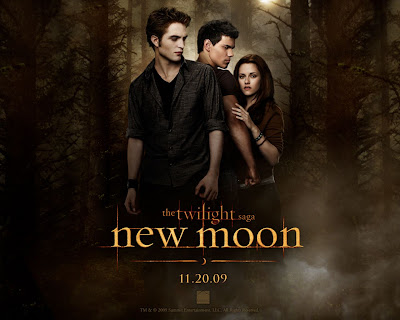 As I grew older and my horizons expanded, I left behind EW and now rarely, if ever, read it at all. One thing that always stuck out to me though, was that I preferred film critic Lisa Schwartzbaum to Owen Gleiberman. And after reading his rather smug and completely off-base defense of The Twilight Saga: New Moon, I remembered why.

In the article, he says:

The ascendance of the Twilight saga represents an essential paradigm shift in youth-gender control of the pop marketplace. For the better part of two decades, teenage boys, and overgrown teenage boys, have essentially held sway over Hollywood, dictating, to a gargantuan degree, the varieties of movies that get made. Explosive truck-smashing action and grisly machete-wielding horror, inflated superhero fantasy and knockabout road-trip comedy: It has been, at heart, a boys’ pig-out, a playpen of testosterone at the megaplex. Sure, we have “chick flicks,” but that (demeaning) term implies that they’re an exception, a side course in the great popcorn smorgasboard.

No more. With New Moon, the Twilight series is now officially as sweeping a juggernaut on the big screen as it ever was between book covers. And that gives the core audience it represents — teenage girls — a new power and prevalence. Inevitably, such evolutions in clout are accompanied by a resentful counter-reaction. For if power is gained, then somewhere else (hello, young men!) it must be lost.

So all the Twilight hate is because of some twisted Freudian desire for male dominance? Not because it's, you know, a piece of trash. Some thick necked frat boys may laugh it off because it's a "chick flick." But Transformers 2 (which, make no mistake, is still the box-office juggernaut of 2009) is just as dumb. But you can hardly say that all, or even most, of Twilight haters feel that their fragile male egos are being challenged. I'm male and I hate Twilight. I also hate "explosive truck-smashing action and grisly machete-wielding horror, inflated superhero fantasy and knockabout road-trip comedy" as he puts it. So where does that leave me? I have nothing against movies targeted at females doing boffo box office. I was there on opening day for Sex and the City, and loved every minute of it. I got annoyed at all those fanboys pulling for The Dark Knight to topple Titanic as the all time box office king of the world, because, frankly, I think Titanic is a far superior film, and has remained one of my personal favorites since I saw it in theaters way back when I was just 11 years old. His argument here just doesn't hold water. 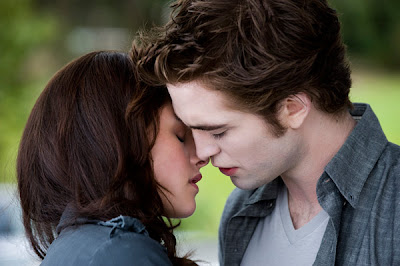 Later, he makes an even more outrageous claim:

I went into New Moon having not read the book, and so I didn’t really experience the movie as an adaptation, or watch it as any sort of Twilight die-hard. Leaving aside a few leaping boy-to-wolf transformations (which could, at this point, have come out of any routine horror film), what I saw, in essence, was a moody romantic melodrama from the 1950s, a movie that told its story, more than anything else, with faces. For two hours, they loomed up there — Stewart, with her pale crystalline severity, her ability to communicate desire and distress at the same moment; Robert Pattinson, with his sweet-but-not-too-safe, hurtin’-eyed, chalky-skinned delinquent chivalry; and Taylor Lautner, with those naturally wolfy features, as the group’s Troy Donahue, a friendly, quick-grinned stud-muffin who’s just buff enough to divert the heroine without threatening to capsize her devotion to her true love.

Say what? I know he knows better than that, after naming Far From Heaven his #1 film of 2002 for its haunting evocation of the 1950s melodramas of Douglas Sirk. New Moon is about as far from Sirk's masterful All That Heaven Allows as you can get. There are no delicate emotions here, no deep, unspoken desires, just some whiny self-loathing. The actors aren't emoting, they're mumbling through their lines and occasionally twitching an eyebrow. But mostly they just look nauseous. Let's not forget, however, that most of those quickie, drive-in 1950s melodramas were terrible.

But here's the kicker:

...the reason I believe that the big-screen success of the Twilight saga bodes well for the future of Hollywood movies is that the teenage girls who are lining up to see New Moon are asserting, in an almost innocent way, their allegiance to a much older form of pop moviemaking: the narcotic potency of mood, story, and romantic suggestion over the constant visual wham-pow! of action, effects, and packaged sensation.

Mood? New Moon is about story and mood? What story? Nothing happens! The books are filled with endless passages of breathless fawning over Edward's glittering body. New Moon drags on and on and on chronicling a shallow, pointless romance between two characters without chemistry who are given no reason as to why they should be together other than "she smells good" and "he's hot." Did I mention that he is an emotionally abusive jerk? Thankfully he's absent for most of the film, so most of the film is filled with moping and self-pity, at least until it occasionally remembers it had some random sublpot about a vampire woman wanting to kill Bella...but that's not very often.

There is a difference between mood and moping. If there is any mood to be had here it's thanks to Alexandre Desplat's lovely score. Otherwise it's just awkward. The only thing that happens in the movie resembling a solid story or a plot happens in the last 20 minutes or so, and by then it's far too late and the supporting characters far too underdeveloped. You want mood? See Claire Denis' mesmerizing 35 Shots of Rum, or Nuri Bilge Ceylan's Three Monkeys, or Michael Haneke's The White Ribbon, or even Spike Jonze's Where the Wild Things Are, a film that is everything Gleiberman claims New Moon is, but isn't. This is not mood. It's emo whining with a captial E.
Email Post

Nate said…
I can't believe he said that! I may disagree with Lisa every now and then but I've always (also) prefer her as a critic over Owen to the point that I defend her alot on the ew comments 'cause people seem to have this hatred for her that's just unjustified. He even tried to defend Revenge of the Fallen some months ago and Lisa rightfully shut him down.

I wholeheartedly agree with every point you made. Twilight is trash and though I haven't seen the movies, the previews along are telling. I did read the first 2 chapters of the first book way back when it came out, at the insistence of a female co-worker and the writing was so horrible and just vile I couldn't continue. As a good literature lover, that's when I became a hater of anything Twilight.
11:18 PM

skylar jones said…
The books actually aren't about "fawning over his glittering body". Bella actually goes through a lot of emotions that a lot of people can relate with. I know that sounds lame, but Meyer wrote the books and created Bella so that people could step into her shoes. It's fantasy. There actually is a huge plot to it. Most people who didn't like it don't even know the story. I'm not just defending this because I'm a girl. I used to think Twilight was stupid. But I started actually reading the books, instead of just watching the movies. Just saying.
2:24 PM