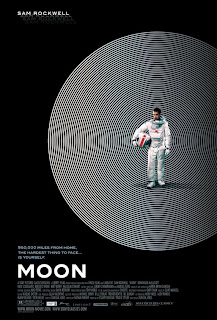 There is plenty of potential in Duncan Jones' Moon to be a stellar psychological science fiction drama, not unlike Kubrick's 2001: A Space Odyssey or Tarkovsky's Solaris. It's the story of a man named Sam Bell (Sam Rockwell) who is working a three year contract for an energy company that has invented a way of mining cleaner, safer, more efficient energy from the surface of the moon. Nearing the end of his contract, and having been on the moon alone for nearly three years with only the base's talkative computer, Gerty (a brilliantly cast Kevin Spacey), for company Sam is looking forward to returning to Earth to be with his wife and young daughter.

But strange things begin happening on the supposedly deserted moon base. Sam begins seeing things - visions of a mysterious woman and other such occurrences. It all comes to a head, however, when after an accident in a lunar vehicle, Sam awakes in the infirmary with no memory of the crash. But when he goes out to the site of the accident to investigate the harvester's failure (each one named after a different Biblical gospel), he makes a startling discovery inside the reckage of the crashed rover - himself.

Is he slowly going insane? If Sam is alive and well in the base, then who is the man in the rover? And why does he look just like him? They're all fascinating questions, but no sooner than they are raised, Jones reveals the answers, and spends the rest of the film with a new dilemma for his characters to solve. The problem is, the ensuing drama is nowhere near as interesting or compelling as the original mystery. But the film chooses not to follow that path, instead following the quest of Sam and his doppelganger to discover where they came from and how to get off the moon safely before a repair team from the company arrives and discovers that their secret has been blown.

It's an appealingly lo-fi production, with less emphasis on special effects than characterization. But I always felt there was more drama, and more suspense, to be mined from the material had it not played all its cards so early in the film. By the time it reveals all its secrets, one can't help but think, "that's it?" It skips and skims where it should take its time and build the inherent psychological drama of the story. The story of a man working alone on the moon for three years slowly slipping into madness (a point, by the way, which is quickly forgotten about in the film), is a premise rich in tension and dread, but, disappointingly, is left largely un-mined. 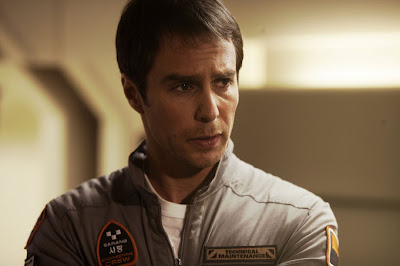 Rockwell is fantastic, however, in what is essentially a dual performance, pulling off different sides and dimensions of the same character. The idea of man vs. himself is probably one of the richest conflicts available to filmmakers, and Moon is a goldmine. But instead of going for the gold, mostly it just pulls up rocks. I wanted more out of it, more conflict, more suspense - I wanted it to convey the sheer loneliness of a man who has spent 3 years on an uninhabited world, I wanted to feel his terror as he slowly loses his grip on reality. Alas, it was not to be.

As it stands, Moon is an interesting little curiosity with a lot of wasted potential. There is a great film lost amid the vast expanses gray moondust and inside the human mind. But the result is, well, simply disappointing.

Bostons Obscurity - Cinema for the curious mind said…
I totally disagree with this. I found moon to be pretty much perfect in tone and pace. It is so refreshing to see a sci-fi film that exists free from all the usual hollywood trappings. The score by mansel (3.14,requiem)is excellent too by the way.
5:22 PM