I missed the all-media screening of Marc Fienberg's Play the Game (Story, 8.25) last week, so I took advantage of a second opportunity at the public promo screening last night to catch up. And when it was over I got to thinking about the vast difference between press screenings and promo screenings. 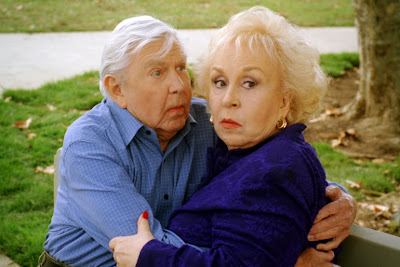 Movies are a shared experience, or at least the good ones are. You walk into a theater with a group of complete strangers, and you share something larger than life. You step into another world for 2 hours and share an emotional journey. Play the Game is, in many ways, a perfect audience movie. Getting to see the film with an audience and see their reaction is almost essential for a true evaluation.

Sure a film should stand on its own with or without an audience. But seeing Play the Game and laughing it up with a theater full of people is, well, just more fun than doing it alone. The audience was in stitches, each uproarious bout of laughter louder and longer than the last, often covering up the next few lines of dialogue. It was a fun experience, and it definitely gave me a much more positive view of the film just because the whole atmosphere was so elated. That doesn't mean the film isn't just fine on its own, had it not been funny to me all the laugh out loud reactions probably would have annoyed me. But I was loving it too so it worked.

It's such a contrast to my press screening of Inglourious Basterds a couple of weeks ago, where me and 5 other critics sat in a theater and screened the film and then left it silence. It was, well, kind of boring. Not that that hampered the film any, I got to observe and study it with no real distractions, but I can't help but wonder how the film plays with an audience. Would I have liked it more if I had been with an appreciative audience? Or was I able to more accurately judge its faults as a result of the venue in which I saw it? It's something I'll never know unless I trek down to the multiplex and pay to see it, which probably won't happen. In the world of current films, you have to keep moving forward and not look back. In other words, I'm just too busy. I just found it interesting how much an audience can affect how you see a film.

What are your thoughts? Do you have any similar experiences?
Email Post

Craig Kennedy said…
I think if you're trying to approach a film from an analytical level, seeing it in silence with 5 other people is probably the best way to go about it.

And yet...movies don't just exist on an analytical level. There is an alchemy that can happen depending on the audience and depending on your own mood. Sometimes I think critics locked away in their ivory towers are sort of outside the bubble in that way.

90% of the movies I see at screenings aren't the raucous crowd-pleasing variety, but the smaller independents and foreign films where a big crowd reaction doesn't really enter into it either way so I can't accurately gauge the difference in my own perceptions. But I do believe the ambience makes a difference. The first time I saw Speed Racer, it was a midnight show and people were jazzed and a little loopy and everyone including me had a great time. A couple days later, the crowd was more retrained and I still enjoyed it, but it didn't quite have the same juice.

But it can't make a bad film good, or even decent. For example, when I attended the promo screening of Friday the 13th for review I tried not to let the audience reaction color my impression. People were absolutely loving it, and I found it intolerable. The usual chatter followed out of the theater "BEST MOVIE EVER", "SO AWESOME", but I was quite sure in my opinion that it sucked.

On the other hand, I saw Bedtime Stories with a bunch of kids at a promo screening and ended up loving the thing. Mine was one of the only positive reviews out there. Not having seen it again, I don't know if I just went with the kids' reactions or if they were really my own.
11:32 AM