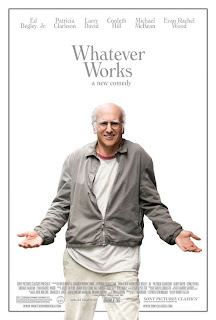 There hasn't been a Woody Allen comedy that has made me laugh in years. Much of his recent output has been either rehashes of his old work or built around contrived central gimmicks. His dark infidelity thriller, Match Point, back in 2005, was excellent, and last year's Vicky Cristina Barcelona was passable, but his latest film, Whatever Works is his finest achievement in many a moon.

Of course, you could easily level the rehash criticism at this film; neurotic May-December romances aren't exactly new to Allen. But this time, Allen's trademark cynical wit is in full force, taking an almost political bent through the eyes of Boris Yellkinoff (Larry David, stepping into Allen's traditional role), a genius level curmudgeon who was "almost" nominated for a Nobel Prize, and now lives out his eccentric days in a small apartment after unsuccessfully trying to kill himself.

Boris hates everything, and his pessimistic view of humanity infuses everything he does, from the chess lessons he gives to children (all of whom he thinks are idiots), to the heated discussions on religion and politics that he gets into with his friends on a daily basis. 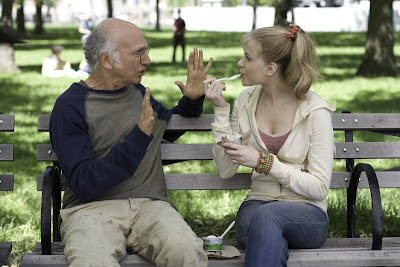 One day, fate lands on his doorstep in the form of Melodie St. Ann Celestine (Evan Rachel Wood), a plucky young Southern belle who ran away from her overbearing Mississippi home to see the world. Boris begrudgingly takes her in until she finds a place of her own, but as the weeks turn to months and it seems as if Melodie may never leave, Boris soon discovers that he doesn't find her ignorance annoying so much as fascinating, and Melodie tolerates his sour attitude and grim outlook on life with her irrepressible charm.

So they get married. But it isn't long before Melodie's mother, Marietta (Patricia Clarkson), a devout Christian socialite, shows up on their doorstep, and begins a quest to find a younger, more suitable husband for Melodie. But, just like Melodie, Marietta finds the call of the city too much to ignore, and soon discoverers her inner artist and enters a three-way relationship with two photography connoisseurs. By the time Melodie's equally devout father, John (Ed Begley, Jr.) shows up, his family is virtually unrecognizable, and even he finds that Boris' live and let live philosophy of "whatever works" may be too much to ignore. 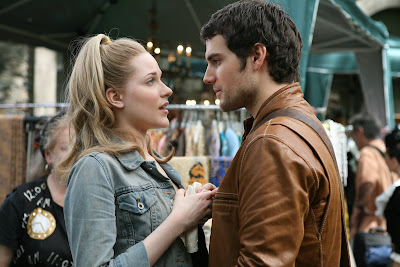 It's Allen's finest work in years, and while the plot may rely a bit too much on coincidence and simple conflict resolution, the quick-witted dialogue (from a screenplay Allen wrote back in his 1970s glory days) and talented ensemble makes it all work. Living in the South, I've met a lot of religious fundamentalists, and while Allen's portrayal of them is more caricature than realistic (they would not have given up their religion so quickly), it fits with the film's satiric comic tone.

Even the May-December romance makes sense in context. Allen's typical neurotic, fatalistic worldview is very much on display here, but it's surprisingly delightful. He displays a nimble, light touch that makes Whatever Works a complete pleasure to watch. Even the potentially gimmicky "breaking the fourth wall" framing device feels fresh and funny. Maybe his work with the light and sexy Vicky Cristina Barcelona rejuvenated him, but whatever it is, Allen is back on top of his game, and Whatever Works is a definite comedic highlight in an otherwise bland summer. Welcome back, Woody. We missed you.

Charles Lyons said…
I really liked it as well when I saw it a little over a month ago. I think Wood and David had a really nice, bumpy chemistry (?), but really, the absolutely lovely Wood keeps the piece afloat for me.

Allen's dialogue is, as it always was back 35 years ago, piffy, harsh, but always sharp. Underrated, I agree.
9:43 AM

Sam Juliano said…
I completely agree with you here!

You and I Matthew seem to be the only people on earth who liked WHATEVER WORKS better than VCB! LOL!!!

Matthew Lucas said…
Sam, I liked VCB well enough, but the narration irritated the hell out of me. I know it's popular with the LiC crowd, but it never struck me as anything more than a breezy little truffle.

This, on the other hand, is one of the finest films of the year - Allen is as good or better here than he has been in many, many years.
5:34 PM