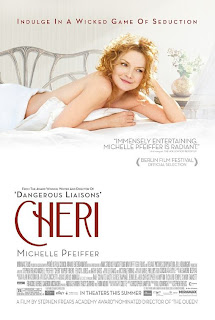 I was really hoping that my first impressions of the trailer for Stephen Frears' Cheri were wrong. I was admittedly intrigued by the premise and pedigree of the film, but when I saw the preview several red flags went up immediately.

Trailers, of course, can be deceiving. But having now see the film, sadly, most of my fears for Cheri turned out to be founded.

It falls victim to a trap that ensnares many period pieces like this - it's so enamored with its own sumptuous beauty that storytelling falls by the wayside.

Director Stephen Frears has proven his mettle with light period comedies like Mrs. Henderson Presents and high-end dramas such as Dangerous Liasons and The Queen, so the talent is there. But for all its potential, Cheri is a stiff, overwrought oddity whose uneven plotting and tone make for an awkwardly paced viewing experience. 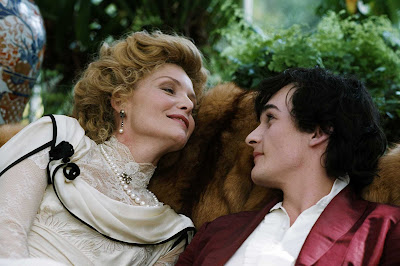 But for all of its structural and tonal problems, the film certainly looks great, and Michelle Pfeiffer is in fine form as Lea de Lonval, an aging, high class courtesan in pre-WWI France whose glory days are behind her, but who still commands a sexy, regal vivaciousness. Lea has been living the high life, content to be a single agent, until 19 year old Cherie (Rupert Friend), the son of a former rival (Kathy Bates), takes a romantic interest in her. More amused at first than anything else, Lea allows herself to be drawn in, but what began as a random fling turns into a six year affair. But when Cheri is forced into an arranged marriage with a girl closer to his own age, both of them realize just how deep their feelings run for each other.

It all starts off well enough as a fun, frothy, just-naughty-enough comedy of manners, but soon devolves into an overwrought melodrama, and never recovers, spiralling down into a glamorous downer. The costume and production design, as well as Alexandre Desplat's score, are all fantastic and the period details are stunning, but the direction, pacing, and wild tonal variances are just so uneven that it doesn't make for an enjoyable experience. 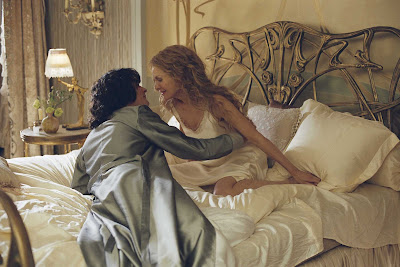 The screenplay by Christopher Hampton gets caught up in its proper period dialogue (and some distracting narration), which carries over into some of the performances, especially by Bates, who seems extremely uncomfortable. For all the film's beautiful detail, nothing feels natural - not the performances, not the dialogue, nothing. The whole affair is very starchy and stagey.It's not erotic enough to be a decent bodice-ripper, funny enough to be a decent comedy, or moving enough to be a decent drama. Instead, it is caught somewhere in the middle, a very awkward limbo state that can't seem to make up its mind what it wants to be, and as a result doesn't really succeed as anything. For all its potential, Cheri gets lost on the road to cohesion.

Charles Lyons said…
I actually thought this was pretty underrated-- don't get me wrong, it's no masterwork, and not even in my top 20 of the year so far, but well-crafted and beautifully acted.

My reaction actually might've been the result of very low expectations, after all of the middling to negative reviews came out. I don't know... I really enjoyed the film.
9:00 AM