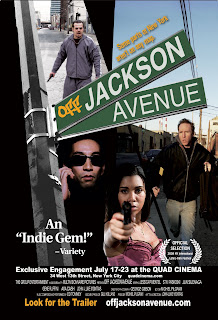 As much as I wish it were not so, independent films have their cliches just as much as mainstream films do. Of all the indie cliches that are in vogue right now, the one that seems to be the most popular, and the most overdone, is the intersecting storyline structure that has defined films such as Traffic, Crash, and Babel. While the technique is nothing new (it dates back to D.W. Griffith's epic masterpiece, Intolerance, in 1916), the sheer number of films that use it as some sort of artistic crutch are becoming overwhelming and tiresome.

The latest in this seemingly never ending parade of films is Off Jackson Avenue, a micro-budgeted indie feature by director John-Luke Montias. Shot in Super 16 over a period of 20 days, the film follows three very different stories on a fateful collision course in and around New York's Jackson avenue.

One is a Mexican immigrant named Olivia (Jessica Pimentel), who is brought to America with the promise of working as a waitress. When she arrives, however, she is instead forced into being a prostitute under the employ of a dangerous pimp Albanian pimp (Stivi Paskoski). Jealous of the Albanian's success, a rival Chinese mobster hires a sensitive Japanese hitman (Jun Suenaga), who is haunted by his recently deceased mother, to kill him off. Apart from all this, a low-rent car thief (John-Luke Montias) decides to go on one last spree so he can make enough money to buy his own shop and go legitimate. 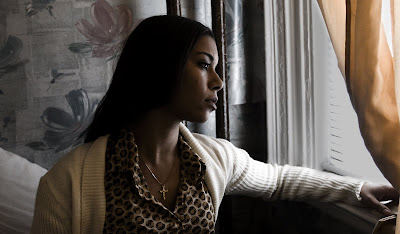 Eventually, in one climactic moment, these stories will converge. But instead of feeling natural and inevitible, it feels a bit forced. In fact the entire production feels a bit, well, cheap. It often has the look and feel of a student film, and the performances often reflect that quality. That being said, despite its obvious shortcomings, Off Jackson Avenue is not only mildly compelling, but it shows great promise for director Montias.

This is no great film, most of its elements are almost instantly fogettable (although I found Judith Hawking's performance as the villainous brothel matron to be terrifying in its cheerful menace), but it is readibly apparent that with better resources, Montias has the ability to direct a solid and entertaining film. 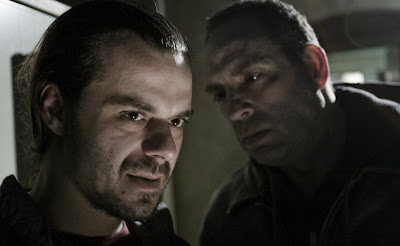 Ultimately, Off Jackson Avenue feels like a template, a first draft of a much better film. The sex slavery story works, and even crackles in places, whereas the tale of the Japanese hitman falls flat, and the car theif segments feel disconnected and mundane. With more streamlining and more time, one wonders how much better it could have actually been. The converging plotlines just don't work. The technique is tired and here it just doesn't ring true. But had it focused squarely on Olivia's harrowing plight, I have no doubt it would have been a more engaging experience.

I'll admit, Off Jackson Avenue held my interest as I watched it, but I found that it faded from my memory very quickly, and as such it is a film that can only be recommended with great reservation. There are quite a few individual elements to like here, but instead of seeming low budget, it often feels cheap. It is easy to appreciate the promise that it demonstrates, but I look more forward to what Montias does next than to revisiting Jackson Avenue.